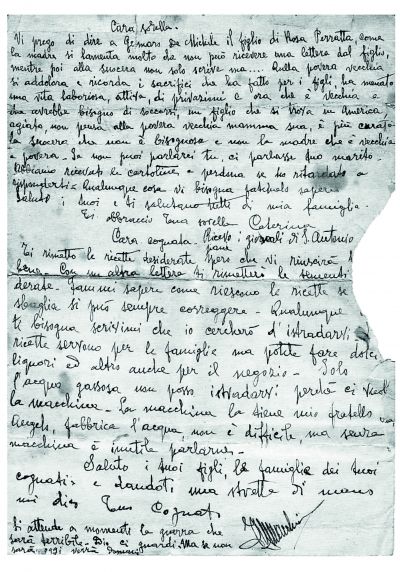 Many immigrants were in regular contact with their families back home. Those who were illiterate had people who wrote for them.
Correspondence from Italy was often read aloud to the entire family. Letters could contain money or a reference to a remittance that was on its way.

Here is an excerpt from this month’s letter from the province of Campobasso, to Lucia in Youngstown, OH. Caterina and husband Francesco answer Lucia’s requests for seeds and recipes. Caterina adds a concern from a woman in the town whose son is living in Youngstown. Would Lucia’s husband please remind him of his filial responsibilities. There is an ominous post script at the conclusion of Francesco’s letter.

Undated. On the eve of WWII,

Please tell Gennaro, Rosa’s son, how much his mother bemoans not having received any letters from him, whereas he not only writes to his mother-in-law, but…It’s a pity to see the pain this poor old woman is in and how she remembers the sacrifices she has made for her children! She has had a difficult life and full of privations now that she is old and needs help. A comfortable son that lives in America doesn’t think about his aged mother, and he’s very mindful of his wife’s mother who’s not in need or poor or old. If you cannot speak to him, let your husband do it.

We received the post cards and forgive me if I’ve been late in answering you. Let me know if I can help you with anything. Regards to all of you. Everyone in the family says hello.

Hugs from your sister, Caterina

I’m getting your St. Anthony magazines and I’m sending you the recipes that you wanted. I hope they turn out well. I’ll send you the seeds that you want in another letter. Let me know how the recipes turn out. If you make a mistake, you can always correct it. Whatever you need let me know and I’ll try to send it to you. These are family recipes but you can make candy, liquors and other things for the store. I can’t help you with the soft drinks because you need a machine. My brother Angelo has one and makes soda pop. It’s not difficult, but without a machine it’s useless (for us) to talk about.

Say hello from me to all your children, to your brothers-in-law’s family, and giving you a handshake your brother-in-law says good-bye.

P.S. At the moment we are awaiting the war, which will be terrible. God protect us. If it’s not today, it will come tomorrow.