Letters from the Old Country 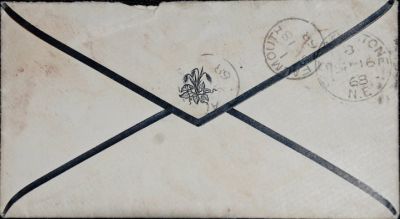 Many immigrants were in regular contact with their families back home. Those who were illiterate had people who wrote for them. Families overseas often communicated the sad news of a loved one’s death with the use of stationery edged in black.
Without unsealing the letter it was clear to the recipient that someone in Italy had just passed away.
Questa è una lettera che fu spedita nel 1937. Il mittente (Francesco) scrisse a suo cognato (Gennaro) per dire che la suocera (Antonia) era venuta a mancare.
La moglie di Gennaro, Lucia, visse a Youngstown, Ohio e sua mamma a Campobasso in Italia.
La lettera riportava che già il funerale fu già celebrato e la mamma fu seppellita in un cimitero vicino a casa.

This month’s old letter is from the province of Campobasso to Lucia in Youngstown, OH. Her mother, Antonia, has just died in Italy. Francesco, Lucia’s brother-in-law, writes to Gennaro in Youngstown: Please communicate the sad news to Lucia in person. It shouldn’t arrive in a letter.

Dear Gennaro,
My wife and sister-in-law, Angelina, have put me in charge of writing you because, with all necessary respect and with every reservation, you will please become the bearer of this news to your sister-in-law, Lucia, that her mother after eight days of influenza, also with bronchitis complications, passed away (Sunday), the 3rd of January at 5 am. She had been provided with all the religious comforts and surrounded by the love of all her relatives with no one missing.
She took ill in the house of her daughter Angelina. Nothing was left undone to help her, day and night. All the cures were tried. No expense was spared, but the illness that affected her was inexorable. Nonetheless cruel death condemned her.
She was given a dignified burial, a walnut coffin with a case, and a solemn funeral, with an enormous amount of people. The funeral took place yesterday (Monday, January 4) in church and this morning (Tuesday, January 5) (we took her) to the cemetery.
I know the noble heart of my sister-in-law and how she loved her mother. I know she gets hurt very easily. You should comfort her. Death is so unpleasant. Her mother was old and it was her time.
I have written to you directly to avoid communicating to her such sad news that would hurt our sister-in-law’s health. My brother-in-law, an exceptional and original fellow, says that he wants to write directly to Lucia. Therefore, try to give her the news immediately so that Giuseppe Pallante’s letter doesn’t arrive first. Certain sad notices should be communicated (in person) by a third party. We haven’t written during the sickness because it was expected that she would get well. Regards from my family and from Godmother Angelina to the entire family of your brother, Giuseppe.

Embracing you, I am your