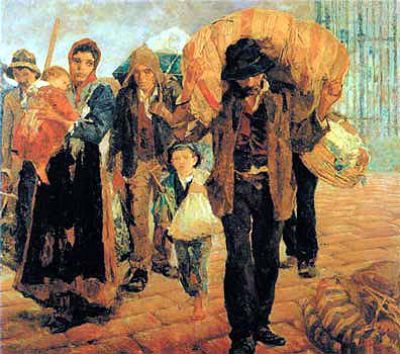 Over the next few months, we are going to explore our Italian heritage from the perspective of our ancestors’ life experiences. This month our focus will be on what our ancestors’ lives were like in Italy at the end of the 19th century and the beginning of the 20th century when the huge wave of Italians emigrated to the U.S. and South America. For those of you who have been fortunate to visit the “motherland” you may have wondered why our ancestors chose to leave their country. Today’s Italy is truly a spectacle for the visitor with its beautiful vistas, architecture, historic ruins, vibrant culture, and some of the best cuisine in the world. However, this is not the Italy that our ancestors knew. In fact, for many of them, they did not even really consider themselves “Italians” until they came to America.

To understand why our ancestors left Italy in mass, we need to research the social, political and economic climate of the Italian peninsula of a century ago. The country of “Italy” was officially formed in 1861, so as a country it is even younger than our own. Before 1861, the peninsula was made up of eight separate states, with seven of the eight ruled by a foreign power or the papacy. For centuries after the fall of the Roman Empire, there were foreign invaders and rulers who exploited the natives and ruling parties changed with relative frequency. With all the chaos and changes in power, it is not surprising that the land dwellers found it hard to have a sense of country. This sentiment was a concern when the new Kingdom of Italy was established and a movement that had been started even earlier to try to bring a sense of nationalism to the new nation was continued. It was called the Risorgimento. In 1870, an Italian statesman was quoted as saying, “although we have made Italy, we have yet to make Italians.”

When our ancestors left Italy, they likely identified more to their town, province or region rather than as Italians. This is further illustrated by the 1,000 different dialects of the Italian language that existed (and still exist to some extent with the older population). In 1860, less than three percent of the Italians spoke “Italian” (the language which originated in Tuscany in the 14th century). If you were to ask your ancestor “what they were,” an ancestor from Abruzzo might be more inclined to tell you that he or she was Abruzzese than Italian; and in a language which was different than the language of a person perhaps living 100 miles away! It was not until they came to America, the Abruzzese, the Calabrian, the Sicilian, that they identified as Italians. Because here in America, someone from the peninsula, for the most part, was labeled as an Italian. It was also for many of our ancestors here in America where they first interacted with other “Italians” not from their community, province or region. So, while Italy struggled to provide its people with a sense of Italian identity, it was forced upon them here in America.

The lack of a strong identity as an Italian was only one of the contributing factors as to why our ancestors emigrated. One of the most compelling reasons was to escape poverty. Between 1880 and 1924, Italy’s population decreased by over 30 percent. Eighty percent of the exodus were of people who came from the south, also known as the Mezzogiorno. There are numerous causes for the poverty that the Mezzogiorno experienced. Essentially, by the late 1800s, Italy became a country whose population had “outstripped” its resources. In the South, the land was poor from erosion, lack of crop rotation and lack of available fertilizer to enhance its quality. As a result, those who worked the land were barely growing enough to feed themselves. The land’s topography, with the large, steep slopes of the Apennine Mountains, provided little flat land to cultivate. This impacted erosion making what land was available not very fertile. Compounding to that was the sloping land was not very suitable for raising large meat animals like cattle. With no abundance of cattle, there was no manure for fertilization. People lived mostly on fruits, vegetables and grains that they could grow themselves. There was nothing extra to sell to others or to trade, it was truly a hand-to-mouth existence for our ancestors.

As the population grew, there was pressure for those who could leave, to do so. Emigration to places like North and South America was said to have saved those who stayed behind. With one-third of the population gone, the meager resources that were available could go a little further. America, with its increasing need for foreign labor and the cost for trans-Atlantic travel becoming affordable in the late 1800s and early 1900s, many Italians set sail as soon as they could scrape together enough lire for a steamship ticket. Next month, we will continue our exploration of life in Italy and what it took to get to America.