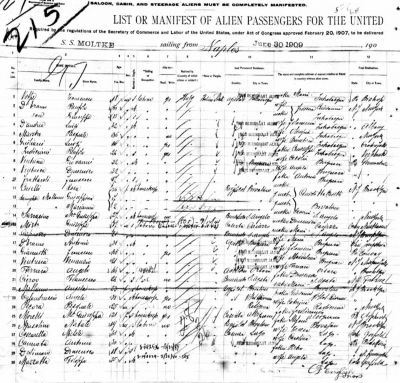 “Discovering La Famiglia” is helping La Gazzetta Italiana readers find answers to their Italian genealogy questions. This month’s story is about Sal DeSimone. He wanted to learn more about his great-grandparents, Panfilo D’Eramo and his wife Giovanna Frissora, who were from Introdacqua, L’Aquila, Abruzzo, Italy.

Sal knew his great-grandparents’ names and their ancestral hometown, but he did not know much more about them and he believed that they had never immigrated to America and likely died in Italy. In our email exchanges, I learned that several of Panfilo and Giovanna’s children emigrated to the U.S. Sal was able to provide their names, where they lived and some birthdates.

My first step was to gather the available U.S. records for the children and see what clues I could find about Panfilo and Giovanna. My second step was to review what Italian Civil records were available online for Introdacqua via the Atenati Portale (www.antenati.san.beniculturali.it) and at Family Search (www.familysearch.org). I was disappointed to find that both sites only had records for the period 1809-1865. Based on the years of birth of the children (1890s-1900s), I estimated that Panfilo and Giovanna were likely born in the 1870s. I also wanted to find the birth records of the children who emigrated because often these records will show parents’ ages. Since these records were not available online, I almost concluded that we would not find the information unless we wrote to Italy to request the records.

The Passenger List of Panfilo’s son, Giuseppe, Holds the Key

In gathering all of the records for the children such as their passenger lists, immigration records, death records, and obituaries, I found a truly unexpected surprise! Panfilo had come to America twice but never settled here permanently and returned to Italy. I found his entry in the passenger list of his son, 15-year-old Giuseppe, with whom he brought to America in 1909. On this list, the question about previous travel to the U.S. was answered “yes” for Panfilo. This passenger list also noted Panfilo’s age as 60-years-old. Now that I had an approximate year of birth (1848-49), I had some hope because those years were within the range of available online records. The important point here is that I had assumed that Panfilo never sailed to America when indeed he did and at least twice. As much research as I do, even I make assumptions sometimes when I should know better!

Using the estimated year of birth of 1848-49, I searched for Panfilo’s birth record at Atenati Portale and found that he was born on 5 December 1848. Additionally, I could also tell Sal the names of his second great-grandparents too, Giovanni D’Eramo and Concezia Di Benedetto.

Unfortunately, I still did not have an approximate year of birth for Sal’s great-grandmother, Giovanna. Sal and I began to search in the records available online for Giovanna’s birth record. Sal found a record for a Giovanna Frissora born in 1859, but we could not be certain it was her unless we could correlate it with a marriage record or one of the children’s birth records.

Since Sal still wants to know more about Giovanna, we will be writing to Italy for her records. However, while we are waiting for records on Giovanna, we continued to explore his D’Eramo line and we were able to locate the marriage record for his second great-grandparents. In that record, we have the names of the couple’s parents adding to Sal’s tree two sets of third great-grandparents. Sal’s family history quest is a good example of how you cannot rely just on online records for tracing your family lines and sometimes you have to go “old school” and write or visit Italy.

If you have a question about your Italian roots or need help with an Italian genealogy puzzle, I would love to hear from you. Please email me at This email address is being protected from spambots. You need JavaScript enabled to view it..