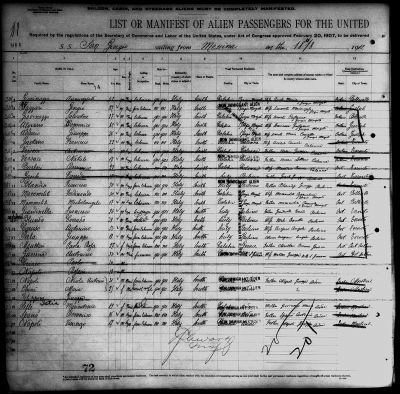 Last month I introduced you to the various annotations that one might find on a passenger list. This month we will focus on other contemporaneous annotations made at the time of immigration.

When our ancestors first came to America, they likely traveled in third class, or steerage, because it was the most economical option as ticket costs averaged $30. All alien immigrants underwent a required inspection to determine if they were suitable for entry. First and second-class passengers were inspected aboard the ship and were free to proceed when the ship arrived at the port. Those traveling in steerage had to undergo inspection. If they arrived at the Port of New York, Ellis Island was the inspection station. Ancestors who became U.S. citizens and made multiple trips to and from America, did not have to undergo further inspection even if they were traveling in steerage. Children who were born in the U.S. to immigrant parents were U.S. citizens. If they were traveling back to the U.S. from a trip abroad, they would not need to be inspected. For U.S. citizen passengers, you will find the annotations: “USB,” “USC,” “US Born,” “US CITIZEN DISCH ON PIER,” “Nat,” or “Natz” written or stamped in the “Nationality” column or in a margin on the passenger list. For naturalized citizens, you will sometimes see a series of numbers; this is usually the number of the Naturalization Certificate. You probably will not see these annotations on the older manifests, because most passengers were coming to America for the first time or had not yet become U.S. citizens. However, the more recent the passenger list, particularly those after 1920, these annotation are more common.

Not everyone who came to a U.S. port planned to stay in America. There were passengers who were transients perhaps on their way to Canada or Mexico and some who were just visiting. Because these passengers were not seeking admission to stay in the U.S., they did not undergo as much scrutiny as the other passengers. They were required to show proof of their final non-U.S. destination. To distinguish these passengers from the others, their line on the passenger list was stamped “NON IMMIGRANT ALIEN.”

One of the columns on the passenger list is “Whether in possession of $50, and if less, how much?” The purpose of this question was to ascertain if the immigrant had enough money to support themselves, at least temporarily, until work could be found. There was no set amount below $50 that was considered an adequate amount. It was up to the Inspection Agent to determine based on the immigrant’s circumstances how much was reasonable. For example, if the immigrant was a younger man and already had family in America, the amount of money needed to support himself and not become a “likely public charge” was less than perhaps an older woman coming to America with little money and no relatives.

Over the years, as more and more immigrants came to America, others who traveled before would give “advice” to the emigres to answer “$20-$25” when asked about money on hand. The rumor was that that amount would get you into America. This led to some immigrants exaggerating the amount of money they were carrying to ensure passage on the ship. Conversely, in some cases, those immigrants who had a large sum of money, would tell the ship purser completing the passenger list that they had far less - probably because the immigrant feared having their money stolen from them while on board or while sleeping in the communal areas in steerage.

Upon arrival at the port, the inspectors counted the passenger’s money and then annotated any discrepancy on the passenger list. Sometimes the verified amount differed slightly because some money was spent onboard. However, if you see the original money annotation overwritten by a substantially different amount, it could be because the immigrant told a little white lie. For early immigrants, it was not unusual to see as little as $5-$10 reported and most were permitted entry as long as they were determined to be able to support themselves.

Next month we will explore the other most common annotations that were created after an immigrant had been in America for some time.