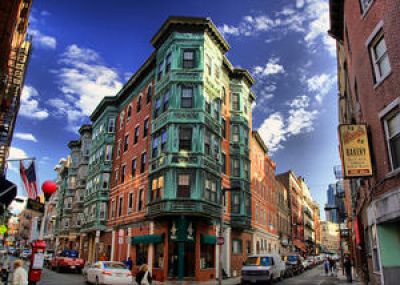 The North End of Boston, MA is a neighborhood with the distinction of being the city’s oldest residential community where people have continuously inhabited since it was settled in the 1630s. This area, only 0.36 square miles, is a pending Boston Landmark. During the 18th century, the North End of Boston became a fashionable place to live. Wealthy families shared space with artisans, journeyman, laborers, servants, and slaves. In the first half of the 19th century, the North End had experienced a significant amount of commercial development. By the late 1840s, living conditions in the crowded North End were among the worst in the city. Waves of immigrants joined residents of the North End, namely Irish, Eastern European Jews and Italians. During the time, Boston, as a whole, was prosperous and the wealthy left the North End for more fashionable neighborhoods in the city.
In 1849, a cholera epidemic swept through Boston hitting the North End most harshly; most of the 700 victims were North Enders. In 1859, tensions between Irish Catholic immigrants and the existing Protestant community forced the Protestants out of the neighborhood. By the early 20th century, the North End was dominated by Jewish and Italian immigrants.
The North End neighborhood housed immigrants from all over Italy: Genoese, Campanians, Sicilians, Avellinese, Neopolitans, and Abruzzesians. Each group settled in their own area within the greater North End neighborhood. All made their living based on skills gained from the homeland. The Genoese were fruit and vegetable peddlers, the Sicilians worked in the booming commercial fishing fleets while others became masons, metalworkers, carpenters, and more.
While most of the Italian-owned businesses in the North End were of the “Ma and Pa” variety, two notable exceptions emerged. Luigi Pastene came to Boston in 1848 and began selling products from a pushcart. By 1870, he and his son, Pietro, had established Pastene as a company specializing in selling groceries and imported Italian products. By 1901, Pastene expanded its operations in the heart of the North End Genoese district. Today, the Pastene Corporation is a major national brand with distribution and packing facilities in New York, Montreal, Havana, and, of course, Italy.
Three Italian immigrants, Gaetano LaMarca, Giuseppe Seminara and Michele Cantella, all from the same village in Sicily, started the Prince Macaroni Company in the North End in 1912. The company became one of the largest pasta manufacturers in the country.
While these two success stories hold fast, the truth remains that the vast majority of Italian immigrants in Boston were met with the same hostile political environment towards immigrants that was felt in many Little Italys across the country. But perseverance, strong community ties and family values typical of the Italian culture pushed the Italian community to surpass the prejudice.
Today, Boston’s North End neighborhood is synonymous with Boston’s Little Italy. Still retaining its “Old World” feel, the area is famous for its restaurants and feasts. St. Anthony’s Feast is arguably the most popular. It has been held on the last Sunday of every August since 1919. It is the largest Italian Religious Festival in New England and has been named the “Feast of all Feasts” by National Geographic Magazine.
Perhaps it’s time to walk the cobblestone streets of Boston’s North End neighborhood where its rich Italian history will seep into your bones. Around 100 restaurants and bakeries entice your taste buds. Grab an espresso or gelato, visit butchers, florists, fish markets, and more all while walking those same streets your ancestors did centuries ago.