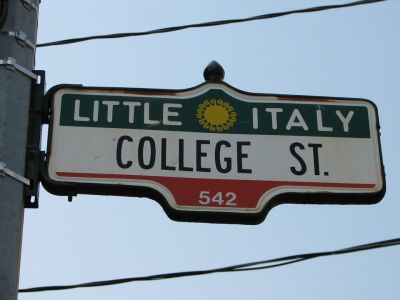 This month, we head a little farther north to find our featured Little Italy. Nestled in between the hip Trinity Bellwoods and cozy Palmerston neighborhoods, Toronto, Canada’s Little Italy is a pocket of culture in the heart of the city. From walking the bustling sidewalks to sipping espressos la fresca, this area has it all.

Italians arrived in Toronto in large numbers during the early 20th century settling in an area centered around College St. and finding work on the railways and in road construction, some even opening their own businesses on and around College St. In fact, the first multicultural radio station in Canada, CHIN, launched in 1966 by Johnny Lombardi and aired from the second floor of his supermarket. Today, CHIN is run by his son and broadcasts in 30 languages.

One of the area’s favorite landmarks is the Italian Walk of Fame, a sidewalk lined with granite and brass stars with the names of notable Italians and Italian Canadians. Films such as “Police Academy” and “Scott Pilgrim vs. the World” were filmed in the neighborhood. Today, the culinary scene of Toronto’s Little Italy is so much more than pizza and pasta (although it’s got that too!). In addition to the trendy and traditional eateries, sidewalk patios of the local cafes boast the real Italian roots of the neighborhood. The Royal Cinema, which opened in 1939, plays movies and hosts events in its historic space while the Super Wonder Gallery offers anything but a typical gallery showing. From concerts to rubber chicken themed music video recording parties, there’s no limit to the zaniness here. And, it’s safe to say that some of the best bars in all of Toronto are in Little Italy. Any visit to Little Italy in Toronto would not be complete without a visit to Café Diplomatico or “The Dip” as it is affectionately called by locals. A Toronto institution for coffee lovers, The Dip offers savory Italian dishes, reasonable prices and fun people-watching opportunities.

Although the area, today, is demographically more of a mix, the atmosphere is still very much Italian. Toronto’s Little Italy is definitely a must-visit destination.