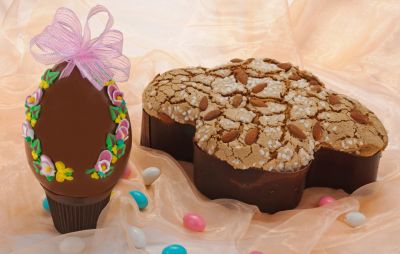 In Italy, Easter, known as Pasqua in the Italian language, is a widely celebrated national holiday that nearly matches Christmas with popularity. Although not entirely celebrated with bunnies and baskets like within the United States, Italy has an emphasis on the more religious aspect of the holiday.

The Italian Easter is celebrated through a variety of ways, including solemn processions and important masses. Starting with Easter Sunday, the following Monday holds the main Easter celebrations. Taking place near the March equinox, this holiday also usually symbolizes the arrival of spring and the end of winter.
In modern Italy, Easter commemorates Jesus’ resurrection in accordance with the Christian bible, although the day of Easter may also have pagan roots traced back many years ago. This holiday emphasizes this religious aspect over the more secular view of Easter in the Italian culture. It’s a public holiday, so schools, banks, and other similar locations are closed for the day while the populace enjoys the celebrations and blessings of the holiday.

Locations around Italy hold specific celebrations to honor Easter. Areas in Sicily hold amazing processions that are held throughout the week, including one that lasts for an entire day. Other locations host plays and public stories illustrating the meaning behind Easter and importance of the holiday. Large crowds gather to watch parades involving the statues of Jesus and his mother Mary, which are carried throughout the gatherers during the procession. Costumes of old ancient clothing can be worn by the participants during this parade. The pope also gives a special blessing in Rome, and Easter Mass is held in every church on Easter Sunday.

Some Italian celebrations of Easter aren’t all about parades and processions. These additional celebrations include public dances, musical concerts, or egg-themed games that can be enjoyed by all ages. No matter what location, an individual is sure to find something to do in Italy during the week of Easter.

Palm fronds and olive branches are important peaceful symbols during this day, and they are used to decorate public areas while others may carry them around for good luck. Important Italian Easter foods include eggs, artichokes, bread, lamb and goat meat, and pie. In the Easter meals, eggs have strong symbolisms attached to it, including fertility and the renewal of life. Special Easter breads include panettone, which is also enjoyed during Christmas, and colomba pasquale, which is also known as Easter dove bread. These delicious breads are commonly given to others as gifts. Wine and cheese are also enjoyed in abundance on this day.

This year, Easter will be taking place on the first day of April. With the celebrations and parades of the holiday approaching, Easter week is sure to be an eventful one in Italy

Tweet
More in this category: « Discovering La Famiglia: Finding Your Family in U.S. Death Records The Essence of Italy: What Makes Italy Italian? »