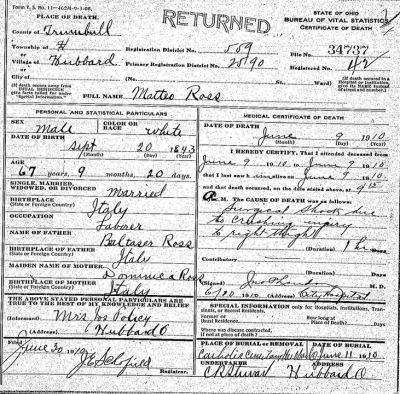 A death record will be the most recent record available for your ancestor. There are several types of records available that record not only death information but may also contain other genealogical information such as an original Italian surname, parents’ and spouse’s names, age or birthday, place of birth and death, date of death, and the cause of the death.

Finding a Death Certificate
The most common record is a death certificate issued by the county or state where the death occurred. The date and location of the death plays a key factor as to whether the death was recorded and where to look for the record. Early death records were usually recorded at the county level, but later, usually after 1906, they were recorded at the state level. Each state started keeping statewide records at various times. Additionally, each state has different rules as to who can request a death record. For example, in the state of Ohio, death records are public records and anyone can request a death certificate. Some states require the requestor to provide proof of relationship to the deceased. The website www.deathindexes.com is a great site to determine what records are available for a particular county or state. Fortunately, many older death certificates are available online at www.ancestry.com (paid subscription needed or free at a library) or www.familysearch.org (free). If you cannot find a death record online, you can also contact the local court house where the death occurred and ask what records are held locally. Sometimes there is a nominal fee to search for and provide an uncertified copy. One caveat on death certificates, particularly very early ones, is that some of the information may be wrong or incomplete. It all depends on how accurate the “informant” was who provided the details. Sometimes the information was not a family member and was just guessing.

One of the challenges that we run into when looking for a death record for our Italian ancestors is determining what name to look for because there are many instances where names are horribly misspelled or Americanized. Recently, I was trying to find a death certificate for a Matteo Rossi who died in Hubbard, OH in 1910. When I searched at www.familysearch.org for his record by using the name “Matteo Rossi” I received no matching results. I knew a death record had to exist since he died in 1910 in an industrial accident. Since I had seen his gravestone which showed 1910, I decided to do a broad search for all deaths in 1910 that occurred in Trumbull County, OH. There were over 2,700 records but I was able to quickly scroll through them. I was looking for any name similar to Matteo’s. About halfway through, I found a death certificate for “Matteo Ross.” The bottom line is to be creative in your search if you do not get immediate results. You can try searching on just a last name. Sometimes it helps to mix up the variables in your search by showing a year range, a place and perhaps either the first name or last name.

Online Gravesite Lookups
There are two cemetery database websites: Find A Grave (www.findagrave.com) and Billion Graves (www.billiongraves.com). Of the two, Find A Grave has more graves in its database, but if you look there first for a death record and can’t find it you should check Billion Graves. Burial information and photos of gravestones are posted by volunteers at both sites so not every grave is available. These sites are especially useful if you are not sure when or where your ancestor died or your ancestor died before state-wide death registration. You can do a general search at both sites to see matches from across the U.S. and some foreign countries.

Obituaries in Newspapers
Obituaries are also a useful source, but whether they exist and how much information they contain depends upon whether a surviving family member made the effort to have an obituary published. For late 19th or early 20th century deaths, you may not find an obituary for your Italian ancestor. Often, their surviving family members were illiterate, poor or perhaps not even in the U.S. There are several subscription websites for online newspapers, two of the most popular are www.newspapers.com or www.genealogybank.com. Local libraries are also an excellent source as they may have the local newspaper digitized. I have had remarkable success calling the local library where a death occurred and asking a librarian to search for an obituary or a newspaper story about a death. In most cases, I was not charged and a digital copy of the obituary was emailed to me.

Finally, when piecing together your family history, go the extra effort and search for the death records of your ancestors’ other family members such as siblings, spouses or children because these records may also have valuable information for your ancestor. Next month we are going to look at the value of U.S. birth records of family members.