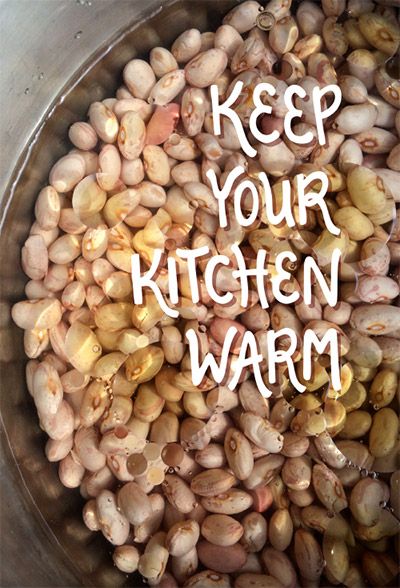 Cooking from scratch, like starting a fire from kindling and cold logs, can be daunting. But once you get your routines warmed up, it’s easier to keep ablaze. These days, my cooking looks a lot less like a start-from-square-one feat I undertake a few times a week and more like stoking a manageable flame throughout each day. I’ve cultivated a practice of keeping the kitchen warm.

I simmer grains on the stove while settling in after a day’s work. I throw foil-wrapped sweet potatoes in the oven any time of day, so I can quickly incorporate them into my next three meals. When I reach into the cupboard for a snack, I’ll also grab a bowl and some beans and start that ‘complex’ task of soaking. In other words, I keep my kitchen warm. Let’s take the bean, for example. The humble dry bean. It’s small, plain in color and slow to become tender. It’s far from a convenient, fast food. But just because a cooking process may span many hours, does that mean it’s complicated and not worth doing? A few years ago, I had a revelation about what happens when you take the time to infuse all the love, herbs and good olive oil needed to make the simplest foods sing. Many home cooks have not fully unlocked the power of beans. At least, I hadn’t understood their power until I met Chicca (kee-kah) Maione. She teaches cooking classes from her Tuscan farmhouse and I stayed with her for six weeks as a volunteer, helping her run them (www.cookingintuscany.cc). Consequently, I also received an immersive education in Italian food culture from one of the best cooks and most open-hearted humans I’ve ever met. Each class culminated in a meal that showed off the food she so clearly loves. Unassumingly sitting on the table amongst the 'star dishes' the students made—spaghetti alla puttanesca and semolina gnocchi—always sat a humble pot of bean soup that Chicca prepared herself before the students arrived. I ladled a cup for myself at the first class and found it mysteriously tasty. At the next class, I ladled another. What is it about this soup? It was as if she packed every ounce of it with as much flavor as it could hold. Any more and it would’ve exploded from good-ness. How does she do it? What is this magic? Night after night, I tasted the soup in order to solve the mystery. When I finally wised up and started observing Chicca in the kitchen before class time, I realized the magic was in the beans. THE BEANS! Humble, unsuspecting, I-never-would’ve-guessed BEANS. Sure, it was easy to see she cooked them from their dried state, while I normally just opened a can (which, trust me, still comes in handy). But, the beauty of cooking dry beans is the opportunity you get to fill them with flavor by adding onion skins, carrot ends, rosemary springs, and lugs of olive oil to the cooking water. More and more, I’m learning that scratch cooking isn’t about spending hours at the stove. It’s about doing small steps each time you set foot in the kitchen. Time can do most of the work. Cooking dry beans, like starting that fire from cold logs, seems like a big investment. But when you chunk it down into small steps on each visit to the kitchen, it becomes doable. I challenge you to ignore the simplicity of opening a can—if just this once—and I invite you to experience the revelation to be had in a slow-cooked bean that has bathed with rosemary. Go forth and make your quiet beans sing.

Tweet
More in this category: « The Delicacy of the Tartufo Bianco in Alba's White Truffle Festival Chestnuts, New Wine and Rural Lore »