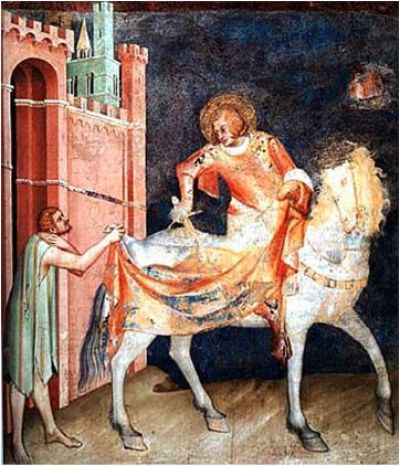 The Chapel dedicated to St. Martin and frescoed by Simone Martini in the 14th century is certainly one of the masterpieces in our Basilica di San Francesco in Assisi, Umbria. St. Martin of Tours, a 4th century saint, is depicted as he gives his cloak to a freezing beggar outside the walls of Amien.

According to legend, the beggar will reveal himself as Christ. The association is there: St. Martin, the bringer of warmth. L’estate di San Martino (“the summer of San Martino”) denotes good weather and warmer days following an early freeze. An inordinately warm fall this year (with resulting strong winds, floods and all sorts of meteorological anomalies) means that this November 11, la Festa di San Martino, will not fall during un’estate di San Martino since our first freeze has not yet arrived. In rural cultures, the mezzadria (sharecropping) contracts were stipulated during the period of l’estate di San Martino. At this time, farm families might move into a farmhouse on another farm. In fact, “fare San Martino” means “to make a move.” An old Italian proverb announces the Saint’s feast day as the time to slaughter the pig and enjoy wine, “San Martino, uccidi il maiale e bevi il vino.” That might have been possible years ago when November brought the cold weather needed for the curing of prosciutto. A Piedmontese saying, “Oche, castagne e vino, tieni tutto per San Martino.” (“Geese, chestnuts and wine, save it all for San Martino”) refers to the period before Advent when farm families indulged in abundant meals before the period of “lean” prior to Christmas. And legend says that when St. Martin was elected bishop of Tours, he hid in the countryside, preferring the contemplative life. A flock of screeching, migrating geese revealed his hiding place. Wine consistently stars in the many sayings of this feast day. “Chi vuol far buon vino, zappi e poti a San Martino” (“For a good wine, hoe and prune at San Martino”); that is, the vines should be pruned after the grapes are picked and before new growth.

Umbria welcomes the Feast of St. Martin with the saying “San Martino, San Martino, castagne e vino” (“St. Martin, St. Martin, chestnuts and wine”). On the evening of November 11, farm families gather around the wood-burning stove in the kitchen to roast chestnuts on the cast-iron stove top. Carrying a couple of clean bottles, the father in the family will head down to the wine cellar to draw the new wine, vino novello, from the huge wooden casks. “A San Martino spilla la botte e assaggia il vino,” goes the saying. “For San Martino, put the spigot in the cask and taste the wine.”

Nowadays, the sharing of wine and roasted chestnuts is enjoyed in town piazzas as well as in farmhouses. At any November culinary festival, there will certainly be a stand offering chestnut flour, chestnut spreads, chestnuts with vino novella. Chestnut-stuffed ravioli and roast goose with chestnuts might also be on the menu – with chocolate-dipped chestnuts for dessert.

Tweet
More in this category: « Keep Your Kitchen Warm Of Meatballs and Mafia »