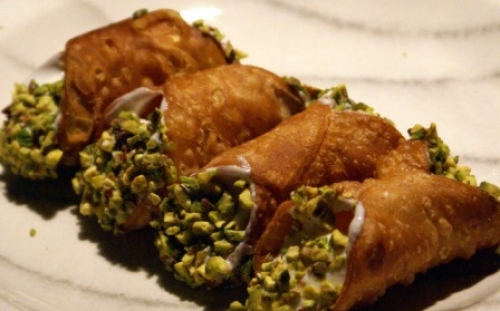 Cannoli are among the most popular specialities of Italian and Sicilion pastry desserts. Without a doubt, it is a dessert that can satisfy the sweet tooth of any Italian! So much so that the Ministry of Agricultural, Food and Forestry Policies has recognized and included cannoli in the official list of Italian traditional products.

Cannoli consist of tube-shaped shells of fried pastry dough (called scorza, generally measuring 5-inches to 7-inches in length) with a creamy, ricotta cheese-based filling. To make the shells, flour, wine, sugar, and shortening are combined and kneaded well. A piece of dough, the size of a nickel, is then rolled out very thin, placed loosely around a cannoli metal tube, and then deep fried in shortening or some other less expensive type of fat, such as vegetable oil.

Prior to the enforcement of food safety regulations, the tubular shell shape was formed by wrapping the dough around a sugar cane stalk. The traditional filling is made with sweetened, fresh ricotta cheese from sheep's milk; however, in Eastern Sicily and especially in the Ragusa area, cows' milk is preferred because of its milder flavor. Candied citrus peel, chopped pistachios and semi-sweet chocolate bits are often included, and the cannoli is then dusted with confectioner's sugar. Ideally, the shells should be filled as soon as they finish frying and immediately before serving, thus allowing the shell to retain its crispy, flaky texture, which otherwise could become soggy by the wetness of the filling. To prevent this from happening, some pastry chefs also coat the inside of the shell with melted chocolate. It is so hard to resist the temptation of biting into one of these crispy shells and the creaminess of the filling, with its delicate fragrance of Sicilian orange flower water citrus!

The term cannolo comes from a diminutive form of canna, a cane-like reed. In fact, up until only a few years ago, the tubular shell shape was formed by rolling the paste into a flat, circular shape, then wrapping it around a sugar cane stalk. Historically, cannoli were prepared as a treat during Carnival, but eventually became a year-round staple throughout Italy. The very first description dates back to probably 1751. Some claim that cannoli were created by the skilled hands of the nuns of a convent by Caltanissetta, thus passing on the legacy of an ancient Roman recipe later on revisited by the Arabs. According to a widespread tradition, however, the name "cannolo" comes from a Carnival prank; in dialect, the word means "faucet" and the creamy filling was squeezed out of the shell as if it were water. Another legend says that the women of the Caltanissetta Castle were the first to invent this recipe. According to this particular tradition, cannoli originated in the harems where the concubines would shape the pastry to honor the sultan's "gifts." In an effort to kill time during the protracted absences of their spouses, the concubines would busy themselves with food preparations. Supposedly, they took an existing Arab dessert made with ricotta, almonds and honey and twisted it a bit, thus creating what has, over time, become a universally popular dessert. Although neither story can be substantiated, it has also been suggested that a few concubines converted to the Christian faith and became nuns in order to continue their communal life in the convent, following the end of the Arab domination in Sicily and the disappearance of harems.

Despite having originated in Caltanissetta, cannoli owe their worldwide notoriety to the pastry chefs in Palermo, who made the recipe what it is known to be today, along with the pastry chefs in Messina that expanded on the traditional cannoli recipe, filling it with nontraditional ingredients such as dark ricotta and chocolate cheese mix.

Tweet
More in this category: « Espresso on Wheels Caciocavallo »