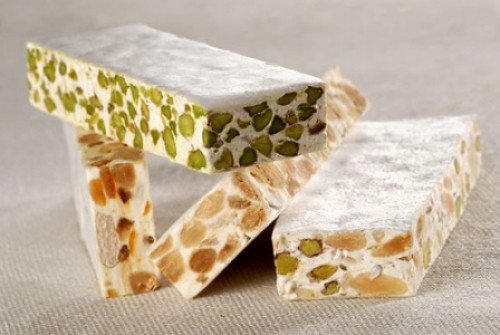 As the weather cools and snow becomes a possibility, my thoughts turn toward the upcoming holidays and memories of family traditions. As a teenager, I worked weekends for my uncle who ran a well-stocked Italian food market in downtown Youngstown. Starting in November, traditional Christmas items would begin arriving from Italy, especially from the town of Perugia, known internationally for its sweet treats.

I especially remember stacking and displaying the colorful boxes of torrone, each of which held smaller boxes. As store clerks in food stores are fortunate enough to do, I got to sample several different brands of this traditional holiday candy, well before Christmas. Some torrone were hard as a brick, other varieties morbido, very soft. They came in different favors: limone, arancia, vaniglia. Each torroncino came with a flaky coating, almost identical to the communion wafer. All the brands featured honey, sugar, egg whites, and toasted almonds, collectively known as nougat.

If torrone is part of your holiday, have you ever wondered about this treat? Its origin is ancient. Torrone is mentioned by Roman authors Livy and Martial. The name probably comes from the Latin verb "torrere," which means to roast; a process essential in making the candy since the nuts are always roasted. Another theory suggests that torrone was an import from Muslim Spain, turun, which reached Sicily along with another Arab product, cane sugar.

In addition to Perugia, Benevento and Cremona are also important torrone producing cities. A Sicilian variety features pistachios, a widely grown nut on the island. Beyond Italy, turrÃ³n is found all over the Spanish speaking world. Thanks to immigration to the Americas from Spain and Italy, this classic treat is sold from Canada to the ends of the earth in Chile and Argentina.

After all our torrone had been enjoyed, my grandfather would collect the small cardboard boxes and, with his penknife, turn them into colorful miniature freight cars to decorate our dining room table. Remember, this was a generation that threw away nothing and created wonderful things from recycled, everyday objects. Now, every winter, I recall not only the delicious torrone, but also Grandpa reusing materials to fascinate his grandchildren.

Tweet
More in this category: « In Italy It's All about the Food The Sweet Carnival in Venice »