A tasteful way of life 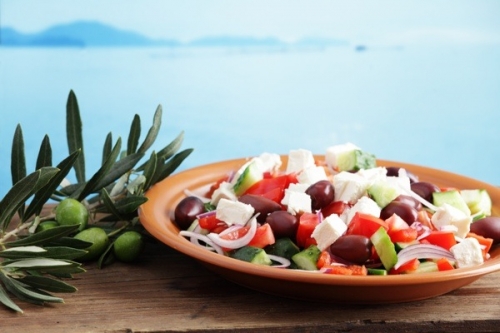 A tasteful way of life

The Mediterranean Diet isn't much of a diet. In the Mediterranean it's a lifestyle. A lifestyle that has proven to have health benefits across-the-board by not only preventing diseases, but by helping maintain perfect health and weight. This healthy way of life exists in the countries surrounding the Mediterranean Sea from Portugal, Spain and France, to Italy, Greece and North Africa. In these parts, life is lived longer and at a higher quality thanks to key components found in the diet. But what exactly does it consist of? How can we emulate it in the United States? And who do we have to thank for this healthy way of life? Well, pour yourself a glass of Merlot with a side of olive oil and bread, as I uncover the secrets and benefits to the Mediterranean Diet.

First there was Adam & Eve who gave birth to mankind, then the Greeks who filled in the rest and gave a sense to existing. Ok, it didn't really go like that, but allow me to fantasize for the sake of the article. Bottom-line: we have the Greeks to thank for many things--architecture, philosophy, mathematics, geometry, theater, mythology, government and of course food, which is the topic that interests us the most, at least for this issue. We know much about the cuisine of ancient Greece thanks to literary and artistic evidence. Not only did Homer, Aristophanes and Athenaeus write about it, artists incorporated the local cuisine in their art, especially in black and red figure vase paintings and terracotta figurines. It was here in the heart of the Mediterranean that the oldest cuisine started and most of it was due to the interaction the Greeks had with the other civilizations.

During the time of Homer, the Greeks began cultivating grain, thus leading to the introduction of bread in their daily meals. Grain was the most important source of proteins and carbohydrates for people and animals. However the Greeks needed to expand to the west to meet their agricultural needs, among many other reasons. Since grain could not be easily grown in Greece, due to the rocky conditions of the soil, they turned to the fertile land of Sicily and Southern Italy. The Sicilian soil was perfect for cultivation of durum wheat which was used for bread.

Homer's heroes had an extraordinary diet. It is in the Iliad and Odyssey that we find the earliest recording of eating. Their meals consisted entirely of meat, bread and wine. Although he never made reference to vegetables, he often included details of the ancient Greek nutrition in his other writings. Surprisingly enough, olive oil was only used in rituals, for example, in the Olympic Games to anoint the bodies of the athletes before entering the arena. That is not to say they didn't consume the olives, actually, olives were a huge part of the meal. In fact, according to Archestratus, olives were to be your companion during every meal. Olive oil for consumption was later introduced in the cuisine during the classical times.

In general, cooking writings were neglected because they were not considered important. In fact, to be a cook in antiquity was a profession of low status. An exception to this was the book by Apicius, a Latin writer, who wrote "De Arte Coquinaria." While in Magna Grecia ("Greater Greece," referring to the territories outside of Greece that were inhabited by the Greeks), Mithaecus was the first food writer. Hailing from Siracusa, Sicily, he wrote the book, "Art of Cooking," a book of poems dedicated to good eating habits which were to be read at the Greek symposiums. Unfortunately we only have a few fragments remaining of this literary work. In Siracusa, the first school for professional cooks was founded, which was run by a man named Labducus. It was during the fourth century B.C. that Alexis of Tarentum wrote: "I learned to cook so well in Sicily that I caused the banqueters to bite the dishes and the plates for joy."

But the master of them all was Archestratus, a man with a very refined palate from Gela, Sicily. We do not know much about the fourth century B.C. Sicilian Greek, who traveled to many cities in Southern Italy, Sicily and Greece. We do know that he was very knowledgeable of geography and far-away places and had interest in fine food and wine. Some critics say that he simply liked food so much and that is the reason why he traveled and wished to inquire everything associated with the belly. In doing so, he gave us all the information as to where each food and drink was found at its best--sounds like a modern day foodie. Many scholars see the philosophy of pleasure from food to be at that time parallel to the pleasure from intimacy.

So how and when did the Mediterranean Diet get across the ocean? Well, in 1945 an American doctor by the name of Ancel Keys who was stationed in Salerno, Italy, attempted to publicize it back in the USA. Guess what? He had no luck in gaining the public's attention. It wasn't until the 1990s when the Mediterranean Diet attracted popularity and slowly made its way into the lifestyles of Americans.

I believe it is say to safe the Greeks were onto something. Today, notwithstanding the "modernization" of foods and drinks in industrialized countries, the Mediterranean Diet has resisted. The modern trends, or rather the diet of "prosperity" that led to more meat (mostly beef) and other animal products, fewer fresh fruits and vegetables, and more processed convenience foods, have only resulted in heart disease, obesity, diabetes and other chronic diseases. Instead the lifestyle of the southern Mediterranean, also considered a "poor" diet, of fruits and vegetables, legumes and nuts, healthy grains, fish, olive oil, small amounts of dairy like cheese and yogurt and red wine, proved to be much healthier and the key to a lifelong of good health.

But if you think what is going on your plate is the only part of the Mediterranean lifestyle, think again. Daily exercise is an imperative element, just consider the celebrated passeggiata--winter or summer, rain or shine, Italians make it a ritual and an important part of their day. Furthermore, another piece of the diet is naturally, sharing the meal with family and friends and of course, appreciating and savoring every delicious bite.

Food and drink are among the most basic human necessities. The Mediterranean Diet, also referred to as the "gold standard" is the perfect balance for a healthy diet and lifestyle. It was in the southern Mediterranean, especially in fertile Sicily where the Greeks found the way to grow simple and fantastic ingredients. And it is there, in the core of the Mediterranean, where back then and even today, cooks transform, with simple, humble and fresh ingredients, delicious specialties...and we have the Greeks to thank for that!