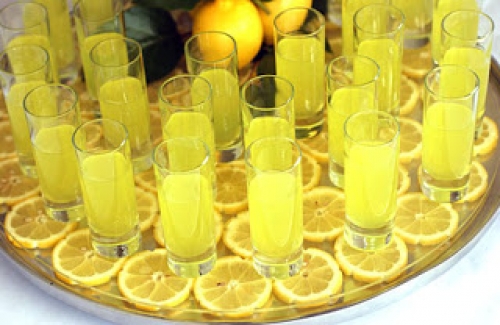 Before the fad that has hit North America in the past 10 to 15 years, limoncello was a syrupy after dinner treat that only those of us who are of Italian decent or who had travelled to Italy had enjoyed. My family has been lucky enough to have enjoyed both.

Limoncello, the after dinner drink that is a specialty of cities stretching from the Amalfi Coast to the countryside of my family's hometown of Conversano, located in the province of Bari (Puglia), has been an important part of who we are and how we've come to know each other as family from different countries. The LaGuardia's of Conversano have been producing limoncello for generations, dating back to long before the farm life that my great-grandfather left to come to America. When he sent for his wife and children, the recipe was left behind and not passed on to us until a group of us returned to Italy in 1995.

The memory of sitting in my cousin Pepino Lorusso's house, which was surrounded by the trees that the lemons were picked from, made for a romantic scene out of a movie (until I got smacked in the back of the head for drinking too much of the limoncello by his 70-something year old wife). If the food served over a four hour span was the thing that brought us together, the limoncello and toasts after were what brought us closer (even if we couldn't translate everything that was being said). The cousins were gracious enough to show us how to make the limoncello, but, like all great things Italian, there really isn't a true recipe that is written down. It takes years of practice and knowing just how much to put into something to make it good.

After the stay in Conversano was over, we were surprised when we arrived back in Cleveland to find that one of the cousins, Mimmo LaGuardia, had decided to buy a ticket for an earlier flight and spend the rest of the summer with us. During his stay in Ohio, Mimmo showed us the LaGuardia-Lorusso way to make limoncello. Needless to say, it was a fun time experimenting and taste testing our batches and having someone there to tell us how it stacked up to the Conversano family recipe.

Since that summer of 1995, making limoncello has become its own tradition for my family here in Ohio. Where it was my father's generation who learned it from Mimmo, my generation has picked it up and there isn't a family party, wedding or any other celebration that doesn't include multiple bottles of limoncello. Sunday lunch is always finished with a few chilled shots of the after dinner drink at my parent's house and we've even branched out to different flavors like lime, orange and cherry.

Like coffee after dinner for other families, our after dinner drink is something that goes back to our roots and a taste of where the LaGuardia family comes from.

Tweet
More in this category: « A tasteful way of life How to make the perfect risotto »