The Little Guy (or The Motor Scooter) 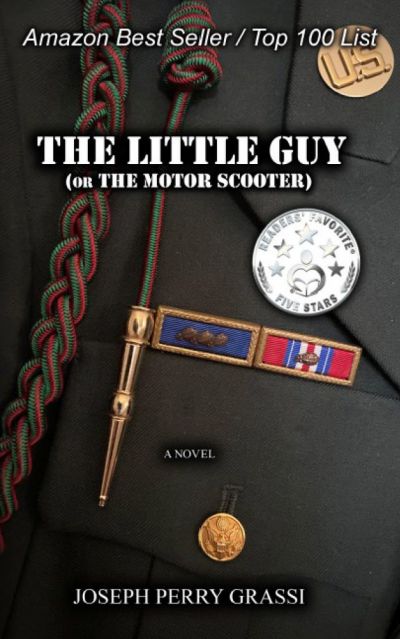 A proud Italian American and Long Islander, Joseph Perry Grassi served as a logistical specialist in the U.S. Army, 25th Infantry Division, from 2002-2006. He is a recipient of the Army Commendation Medal, Army Achievement Medal, Global War on Terrorism Medal, National Defense Medal, and Afghanistan Campaign Medal. Prior to enlisting, he worked as a professional writer for a number of New York-based publishing houses. Since leaving military service, he has worked in non-profit and public sectors dedicated to supporting veterans. He earned a Bachelor of Arts Degree in English (Literature) from the State University of New York at Stony Brook in 1995.

Published in June, Grassi’s new novel, “The Little Guy (or The Motor Scooter)” combines both drama and comedy to explore important questions about America, the military, the love for one’s country, and romantic love to boot.

Corrado Giordano is an undersized Italian American working as a small-time magazine editor in the New York metropolitan area who is just looking for love; but love is not looking for him. When New York City is attacked, grizzled war veterans in Corrado’s family ridicule his opinions, belittle his college education, and question his heart. Tempting fate, Corrado thrusts himself into the United States Army and deploys for hazardous duty. In the scorching heat of Afghanistan, Corrado believes everything will be alright if he can just focus all of his energy on following orders and maintaining his sanity until he learns that—even though he’s just a supply guy, in the rear with the gear—every soldier in the Army is an infantryman first. Surrounded by officers and enlisted soldiers from almost every walk of life, both the beauty and ugliness of America are revealed to Corrado, but will this revelation stop him from getting back home to live the American Dream?

In recognition of Veterans Day, the author is making the Kindle/iPad/Smart-Device version of the book FREE to the public on Nov. 11-12. Currently, the five-star rated, 550-page novel is available for purchase on Amazon.com and BarnesandNoble.com and other fine book sellers.

Tweet
More in this category: « Frank and Ava Meet the Author: Diana Giovinazzo »