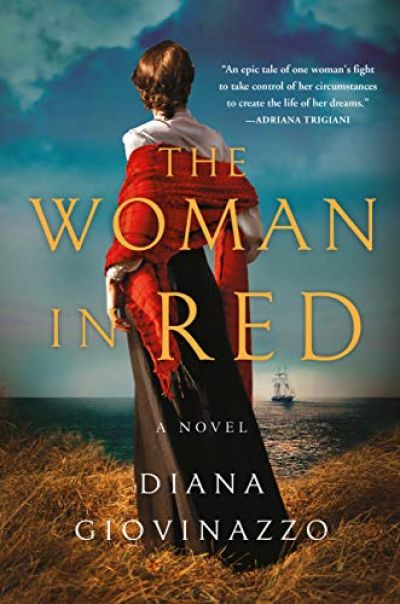 “Destiny toys with us all, but Anita Garibaldi is a force to be reckoned with. Forced into marriage at a young age, Anita feels trapped in a union she does not want. But when she meets the leader of the Brazilian resistance, Giuseppe Garibaldi, in 1839, everything changes.

Swept into a passionate affair with the idolized mercenary, Anita’s life is suddenly consumed by the plight to liberate Southern Brazil from Portugal — a struggle that would cost thousands of lives and span almost ten bloody years. Little did she know that this first taste of revolution would lead her to cross oceans, traverse continents, and alter the course of her entire life — and the world.

At once an exhilarating adventure and an unforgettable love story, ‘The Woman in Red’ is a sweeping, illuminating tale of the feminist icon who became one of the most revered historical figures of South America and Italy.”

“The Woman in Red” is the debut novel of Diana Giovinazzo. Published this year by Grand Central Publishing, Diana’s book takes readers on the epic journey of Anita Garibaldi, a heroine of Brazilian and Italian history. La Gazzetta Italiana had the honor to speak with Giovinazzo about her novel.

Diana stumbled into the historical fiction genre of writing almost accidentally. For a long time, she thought her genre of writing was within the fantasy theme. Over the years, she researched her Italian family history (her family hails from Calabria and Sicily) and as a teenager traveled to Italy and, obviously, fell in love with the country and the history of her ancestors. Her dad is a published author (he is also a contributing writer to La Gazzetta Italiana) and he encouraged her to “look into Anita Garibaldi.” Diana’s immediate response was “but, she’s Brazilian…” But dad kept nagging. It took one sentence in one book for Diana to become enamored with Anita Garibaldi and her story. “I was stuck in the fantasy genre. Until Anita. I realized that historical fiction is my genre, the genre that I love. And not just historical fiction, but historical fiction featuring women. There is so much we do not know about women in Italian history. I hope to change that.”

For as long as Diana can remember, her life was all about books and stories. She wanted to become a successful writer. Growing up, her parents always encouraged her to read. Diana’s mom would often give her a 15-minute time limit in a bookstore to collect all the books she could carry. After returning with a large stack, her mom would purchase the books and Diana would spend hours reading through each one. It was her parents’ love of reading and writing that inspired Diana to begin her own journey as an author.

When Diana is not writing or reading, you may find her co-hosting her podcast “Wine, Women and Words,” with her Sicilian co-host and best friend, Michele. The literary podcast features Diana and Michele picking authors’ brains about how they create. With wine involved, some very interesting stories emerge!

“The Woman in Red” is available now, but Diana’s work is far from over. Diana’s next novel will feature Maria Carolina, also known as Charlotte. Charlotte was the queen of the Kingdom of the Two Sicilies and sister to Marie Antoinette. After deep diving into the history of the Kingdom of the Two Sicilies, Diana discovered much about King Ferdinand and thought “what poor woman is this guy’s wife?” Then she met Charlotte. “The story takes its own life. There is much more to Italian history than mafia and meatballs. It is unfortunate that we do not know much about these fascinating and important Italian women. The narrative in schools surrounds the men and the decision makers. But, what about the women?” Lucky for us, Diana is here to answer that question.

“The Women in Red” is available now. You can also hear Diana’s podcast at winewomenwordspodcast.com.