From the Italian American Press - Out of Rushmore’s Shadow 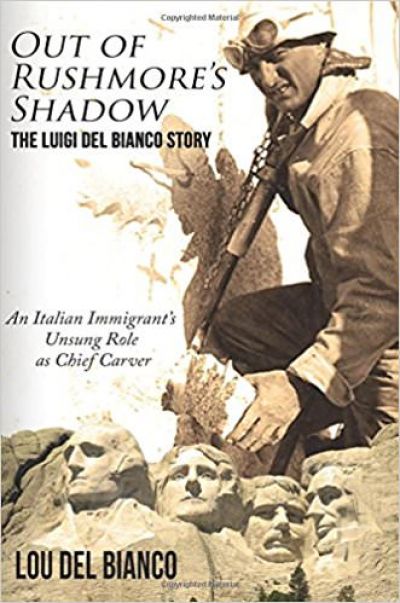 The faces on Mount Rushmore, an American icon, were brought to life by the hands of an Italian immigrant. Luigi Del Bianco, a native of the northeastern region of Friuli-Venezia Giulia, was the “chief carver” and “granite expert” for the massive monument.
“Out of Rushmore’s Shadow” written by Luigi Del Bianco’s grandson, Lou Del Bianco, chronicles Luigi’s life and work, presents a behind-the-scenes look at the carving of Mount Rushmore and gives an account of the path Lou followed to have his grandfather recognized as the chief carver of Mount Rushmore.

When Lou was a child, he found a brochure about Mount Rushmore and learned that his grandfather had been the chief carver of the memorial. He gives a class presentation but cannot find a mention or picture of his grandfather in the brochure. Fifteen years later, “the most definite book on Mount Rushmore was published,” but Luigi is not mentioned. Luigi’s son Caesar is upset, Lou’s curiosity is “reawakened,” and together they vow “to find Luigi once and for all.”

Through the years, Caesar had collected several books and had documents noting that Luigi was the chief carver, hired by Gutzon Borglum – the sculptor who designed Mount Rushmore. The information Lou and Caesar had was limited, but enough for them to start their “own investigative research.” It begins with a visit to Mount Rushmore where Lou learns about The Borglum Papers housed at the Library of Congress. Subsequent visits with Caesar to Washington D.C. produced numerous memos, letters and work logs that document Luigi’s importance in the carving of Mount Rushmore.

Luigi Del Bianco was introduced to Gutzon Borglum in 1920. He worked with Borglum on the “Wars of America” sculpture in Newark, New Jersey and briefly on the bas-relief sculpture on Stone Mountain, GA. Borglum left the Stone Mountain project before it was completed and later began work on Mount Rushmore. During this time, Luigi settled in Port Chester, NY and established a memorial stone-carving business.

In 1933, Borglum had a letter sent to Luigi asking him to travel to the Black Hills of South Dakota to work on the faces of the Mount Rushmore monument. Luigi drove the 1,800 miles and lived in Keystone, the town closest to the monument. His job was “Chief Carver, in charge of all Close Drilling and Carving.” After two years in Keystone, Luigi sent for his wife and three sons. They stayed one year and Lou provides numerous recollections from his father about living in the Black Hills.

Lou also includes a primer on carving the “giant faces,” detailing the five-step process of pointing, blasting, drilling, honeycombing, and finishing. He writes “it took 14 years to complete Mount Rushmore … the money problems, working around bad granite, the lack of trained men and supposed political corruption all must have contributed to the dragging out of the project.”

In February of 1941, Gutzon Borglum died, leaving the supervision of Mount Rushmore to his son, Lincoln. “Difficulties with pegmatite stone, WWII, and certainly the passing of Gutzon Borglum contributed to a major slowdown of the work. On October 31, 1941, the last scaffold was removed and the last drill put away. Mount Rushmore was considered officially finished.” Luigi went back to carving on a smaller scale.

Lou writes about the telephone calls, meetings, letters, and other correspondence with the National Park Service – 30 years of communications in his goal to have his grandfather recognized for his work as Chief Carver. On September 16, 2017, he attended the ceremony at Mount Rushmore National Park honoring Luigi Del Bianco with a plaque. The Park Service’s website notes, “As Chief Carver, Luigi Del Bianco was trusted by Gutzon Borglum to oversee some of the most challenging and expressive aspects of the sculpture, such as Jefferson’s lips and Lincoln’s eyes.”

“Out of Rushmore’s Shadow” is a fascinating look into an Italian immigrant’s life, the history of an American monument and how they intertwined. The book includes copies of documents from the Library of Congress and many historic photos from the Del Bianco Family Collection.