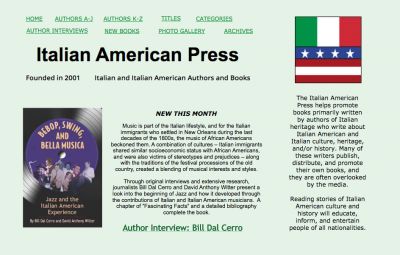 In 2001, educator and author Ralph J. Ferraro founded the Italian American Press, an online resource providing information and marketing assistance for Italian American writers. In 2011, Ralph transferred ownership of the IAP to Janice Therese Mancuso. Since then, the IAP has served as an online source of books primarily written by authors of Italian heritage.

The selection of books covers every topic, but the one thing they have in common is showing the author’s respect for Italian American and Italian culture, heritage and history. One book that combines all the great attributes of books on the IAP is “Italian-American Fusion: Italy’s Influence on the Evolution of America” by retired Colonel John C. Liburdi.

With a dedication “to American and Italian soldiers, sailors, and airmen who courageously served together in Iraq and Afghanistan…,” “Italian-American Fusion” begins with a chapter on “Nation Building,” Italian explorers, politicians, educators, and businessmen who helped formed the foundation of America.
Although some don’t equate Italy with military power, Liburdi’s chapter on the topic points to modern-day Italy as “a big contributor to the viability of the U.S. military industrial base.” He writes about Machiavelli’s linear tactics of battle used “during the American Revolution and the Civil War and da Vinci’s “unique talent as a designer of war machines.”

In “Science and Technology,” Archimedes, born on the island of Sicily in 287 BC, is given “honorary Italian” status; da Vinci gets another nod as “perhaps the most prolific inventor of all time;” and Galileo is noted as “the driving force behind the scientific revolution in the Middle Ages.” Other notable inventors are mentioned, along with an “important Italian contribution to the space station…the Cupola window.”

Through “Art and Architecture” and “Performing Arts,” Liburdi provides page after page of “Italian involvement:” the exquisite fresco by Brumidi in the Rotunda of the Capitol Building in Washington, D.C.; the sculptured artwork of the Piccirilli brothers; the columns, arches and domes on the buildings designed by Palladio; the Italian immigrants who helped build “the bridges, tunnels and scenic overlooks…of the Blue Ridge Parkway;” and others who have added so much beauty to America.

Palladio also created “the first three-dimensional stage sets” for theater, “and his technique is still being used to create stage sets in modern theaters.” Liburdi writes about the melodious sounds of Caruso, Lanza and Pavarotti, and works by composers Vivaldi and Mancini that used to be heard on radios – now heard on Pandora – along with the tunes of Dino Paul Crocetti (Dean Martin), Frank Sinatra and many other wonderful Italian and Italian American voices. Neorealism in film, film directors and silent film star Rudolph Valentino are all part of the Italian influence on the American film industry.

The chapter on “Sports Legends” starts with Angelo Siciliano who “morphed into Charles Atlas – America’s most perfect muscleman.” Liburdi writes about baseball, football, boxing, wrestling, auto racing, and the Olympics all with superstars of Italian heritage adored by their American fans and notes one of the most popular participated sports in America is bocce.

In “Mobile Nation,” Liburdi shows how Italian modes of transportation from automobile design, manufacturing and management, to motorcycles, trains and even luxury yachts and cruise ships have helped shape those businesses in America.

Other chapters in the book cover Italian food, beverages, fashion, furniture, home design and decor, and the overall lifestyle of Italian ethnicity. “Italian-American Fusion: Italy’s Influence on the Evolution of America” is a well-documented resource and informative guide, a handy book to refer to for relevant examples of how those of Italian heritage have contributed so much to America.

Visit the Italian American Press, www.italianamericanpress.com, to view the wide range of books about Italian American and Italian culture, heritage and history. Help preserve your Italian heritage by learning more about it and by sharing what you learn with your family and friends.

Tweet
More in this category: « Enzo Avitabile - An insatiable thirst for musical knowledge across the ethnic tapestry From the Italian American Press »