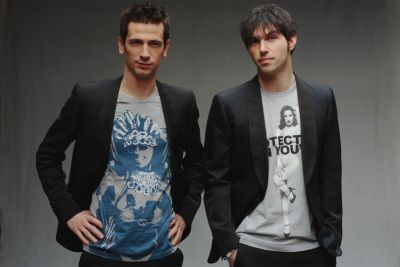 When two people have known each other from an early age and for better than half their lives, they become accustomed to each other’s mannerisms and characteristics. There isn’t much that one can “get past the other” and to be able to function together consistently and productively requires mutual respect and willingness to compromise. Never is this more evident than in the world of entertainment, specifically, in the field of music. It is rare to see any group remain intact for extended periods of time as success, or the lack of it, will take a toll on the relationship. This is what makes the association between Thomas De Gasperi and Matteo Maffucci all the more remarkable.

These two native Roman singer/songwriters were born within 11 months and less than a quarter mile from each other. They first met at the renowned Liceo Classico Statale Giulio Cesare (Julius Caesar State Secondary Institution) in 1992 and developed a kindred friendship displaying similar interests in classroom studies and musical tastes. Upon completion of their education they began composing their own original songs and by 1999, after signing on with Universal Music Italia, they christened their joint music venture Zero Assoluto and released three video singles over the course of the next three years, experimenting with pop-rap sonorities. Unfortunately, their initial efforts garnered only minimal attention and left them seeking mainstream acceptance. They continued adding to their music library but also sought to establish successful collaborative associations. They also set their sights on releasing their first full-length album.

Zero Assoluto enlisted the services of fellow Roman and burgeoning songwriter/producer/guitarist Enrico Sognato. Their next four singles, “Magari meno,” “Tu come stai,” “Mezz’ora,” and “Minimalismi,” would find their way onto their debut album “Scendi” (2004). The recording was released on the Universo independent record company and surprisingly achieved gold status. The more commercial pop-oriented songs also received favorable critical reviews, allowed them to make more frequent television appearances and earned them increased exposure outside the area of the Italian capital. Zero Assoluto submitted their next single “Semplicemente” to the 2005 Sanremo Music Festival selection committee but it was not selected for entry into the competition. Undaunted, they released it, instead, as their next single and the results were astonishing as it achieved double platinum sales proving the “experts” wrong. It shot up to number two on the charts and remained there for 30 weeks. Vindicated, the group would strategically release a series of platinum hit singles including “Svegliarsi la mattina” (2006) which was entered into the 2006 Sanremo Music Festival and reached the finals finishing second in the Gruppi (Group) category. “Sei parte di me” (2006) was presented at the 2006 Festivalbar Music Competition and earned the prestigious “Premio di Rivelazione dell'Anno” (Revelation of the Year Award). “Appena prima di partire” (2007) was selected for inclusion at the 2007 Sanremo Music Festival and finished in ninth place among the 20 participants in the “Big” category. “Meglio cosi” (2007) was once again accepted for the 2007 Festivalbar Music Competition. These songs would make their way onto their second album “Appena prima di partire” (2007). The album attained platinum status and yielded yet two more hit singles, “Quello che mi davi tu” and “Seduto qua.”

Later that year, they set out on an extended tour throughout the entire Italian peninsula in support of their breakout recording. They were in high demand for television appearances upon their return from the road. In the spring of 2009, Zero Assoluto published the autobiographical, diary-documentary “Sotto una pioggia di parole – Appunti disordinati di un disco” which followed the exploits of the group over the period of their young professional careers.

Zero Assoluto returned to the studio and released their fourth album “Perdemi” (2011) on their new label, EMI, and returned to their earlier pop-rap music approach. The recording yielded three popular singles, “Questa estate strana,” “Se vuoi uccidimi” and “Perdemi.” They embarked on a summer tour in support of the release.

Afterwards, taking a brief pause from touring and recording, Zero Assoluto would not return to the studio for nearly three years when they released their fifth album “Alle fine del giorno” (2014). The recording continued their commitment to the less commercial pop-rap music genre. Three successful singles would be released over the course of the next 11 months. “All’improviso,” “Adesso basta” and “Un’altra notte se ne va,” all of which were well received by the public and critics alike.

The group’s most recent release “Di me e di te” (2016) contained the title track which was entered into the 2016 Sanremo Music Festival. The song failed to reach the finals but would be the first of four successful singles that would be released over the course of the year.