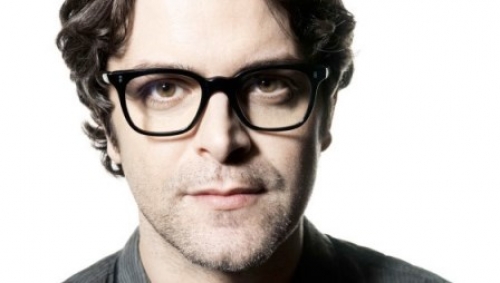 The story of Italian singer/songwriter and pianist Samuele Bersani, at first glance, may seem simple and ordinary, no different than that of many of his musical colleagues born during the period of the late sixties/early seventies. He was born on Oct. 1, 1970 in the Adriatic seaside comune (village) of Cattolica, nestled on the outer perimeter of the province of Rimini in the northern Region of Emilia-Romagna.

Samuele grew up in a household that was "rich" in the arts and culture as his father was a flautist and music instructor. Experiences in such an intellectual atmosphere were a key factor in his developing an early attraction to music. However, upon closer inspection, one can begin to appreciate the subtle differences between him and his peers as a result of the external influences coaxing him towards this musical predisposition, as his hometown was historically replete of renowned artists and architecture. Cattolica was even mentioned in Dante Alighieri's masterpiece, "The Divine Comedy," and is the site of excavated ruins dating back to the year 200 A.D. Samuele learned to express his thoughts and feelings through storytelling and singing, which later coalesced into lyrical composition reinforced with piano accompaniment. During his teen years, he immersed himself in the local music scene performing in numerous fleeting musical groups.

He would soon catch the eye of legendary Italian (Bolognese) recording artist Lucio Dalla, who in 1991 invited Samuele to join him on his hugely successful "Cambio Tour." His opening act was simply entitled "Piano e voce" thereby allowing him the opportunity to introduce himself to a new legion of admirers who enthusiastically enjoyed his delicate yet mesmerizing performance. Sensing an opportunity to make headway in this challenging profession, Samuele shortly thereafter relocated to Bologna to study under Dalla and continue his musical development. His debut recording "C'hanno preso tutto" (1992), released on Dalla's "Pressing" label, would yield three singles including the hit "Chico e Spillo" which enjoyed an extended stay on the Italian music charts and was presented by Bersani at the 1993 Festivalbar Music Competition. He composed the song "Crazy Boy" for legendary Italian female recording artist Fiorella Mannoia who included the song on her popular 1994 recording "Gente commune." Samuele returned to the studio to release his second album "Freak" (1994) which also yielded three singles including the hit "Spaccacuore" which was later covered by Laura Pausini on her hit album "Io canto" (2006). The recording also featured important musical contributions from Rosalino (Ron) Cellemare and Lucio Dalla. Samuele would later repay his "maestro" by co-authoring one of Dalla's most famous songs "Canzone" in 1996. Bersani's good fortunes continued with the release of his third album, the self-titled "Samuele Bersani" (1997). As with his previous two recordings, the album yielded three singles including the hit "Giudizi universali" which in 1998 was awarded the recently established "Premio Lunezia" in the musical category of "Miglior testo letterario" (Best Literary Text). The song also later appeared on the soundtrack of the comedy feature film "Chiedimi se sono felice" (2000). Bersani also composed the song "Isola" for Italian female recording legend Ornella Vanoni which appeared on her 1999 recording "Adesso."

Samuele's professional crowning achievement finally arrived with an invitation to the 2000 Sanremo Music Festival and, in his debut performance, his composition "Replay" earned him fifth place among the 16 contestants and the "Premio dell Critica" (Critic's Choice Award). The song would eventually make its way onto his fourth studio recording "L'oroscopo special" (2000) which was later recognized with his first "Premio Targa Tenco" award as the "Miglior Album dell'Anno" (Album of the Year). He found the time to author the song "In percentuale" for the legendary Mina (Mazzini) which appeared on her hit album "Veleno" (2002). Bersani chose to release his first "Raccolta" (Greatest Hits) "Che vita! - Il Meglio di Samuele Bersani" (2002). The album contained three "inediti" (un-released songs) and sold over 100,000 units achieving platinum status. His fifth album "Caramella smog" (2005) yielded the hit single "Cattiva," both of which were recognized with his second and third "Premio Targa Tenco" awards for "Miglior Album dell'Anno" and "Migliore Canzone dell'Anno" (Song of the Year). The recording also featured the musical contributions of noted Italian artists Fabio Concato, Sergio Cammariere and Mauro Pagani. The album proved to be very popular among both the public and pundits alike. Samuele had finally achieved elite status as a result of his numerous accomplishments.

This inspired him to leave BMG Ricordi and sign on with the local Bolognese Independent label "Fuori Classifica Edizioni Musicali" in order to better coordinate his recording and touring demands. His sixth album "L'aldiquà" (2006) contained the advance hit single/video "Lo scrutatore non votante" and achieved gold status. It peaked as high as third place on the Italian music charts according to FIMI (Federazione Industria Musicale Italiana) for 2006. The recording featured a collaborative piece with Gino (Pacifico) DeCrescenzo on the song "Occhiali rotti," which received the prestigious Amnesty International Award (Premio Amnesty Italia) in the category "Voci per la libertà (Voice for Liberty) - Una canzone per Amnesty (A Song for Amnesty)." Bersani's seventh album "Manifesto abusivo" (2009) contained the hit single "Un periodo pieno di sorprese" and also included a cover of the song "Ferragosto" which was previously co-written with Sergio Cammariere and appeared on his album "Sul sentiero" (2004). Samuele found himself returning to the 2012 Sanremo Music Festival after a 10 year absence as he presented the song "Un pallone" which made its way onto his second greatest hits compilation "Psyco - 20 anni di canzoni."

Samuele set out on his most ambitious tour to date, after the festival, celebrating the 20th anniversary of his professional recording career. Samuele's most recent studio recording "Nuvole numero nove" (2013), his eighth overall, reached the top position on the Italian charts and again yielded three singles. Bersani was most recently collaborating with his friend Pacifico and Italian recording legend Francesco Guccini on the single "Le storie che non conosci."

For more information you can visit his website at www.samuelebersani.net.