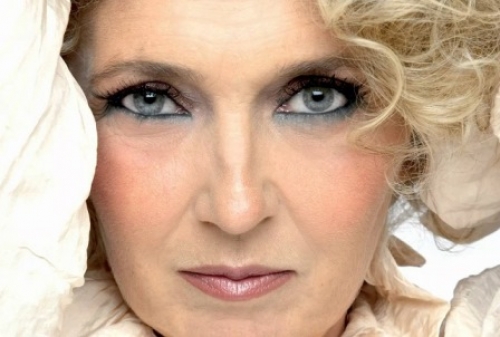 In most human endeavors, talent, just like the proverbial "cream," tends to rise to the top. Those with skills, however, can soon find themselves floundering when they are tempted to coast on their abilities. Diversification can be the solution to the monotony that can occur when activities become too rote or predictable. Musicians are not immune to this fact, and, as a result, many have been known to disappear completely out of sight. Italian female singer and songwriter Rossana Casale is an example of an "adaptive" performer who is generally classified as a jazz artist but is also an adventurous individual who will, on occasion, delve into the areas of adult contemporary pop and world music.

She is fluent in both Italian and English and is a multi-nationalist, having been born in NYC to American father, Jack Casale, and Venetian mother, Anna Marina, on July 21, 1959. She was the second of four children and was soon re-located, along with the rest of the family, to Italy to reside with her maternal relatives in Venice. Her family moved one more time to Milan as her father, who was a professional photographer, found employment with several Italian-based, American advertising agencies. It was here, in the music center of Italy that Rossana began immersing herself in the local entertainment scene and was drawn to a variety of styles including jazz and pop. By age 13, she was performing as a background vocalist with local fledgling bands and later enrolled at the "Conservatorio Giuseppe Verdi di Milano" to refine her vocal and songwriting talents and study keyboard theory. These efforts would not go unnoticed as she was soon collaborating on albums of noted established Italian artists including Riccardo Cocciante, Mina, Roberto Vecchioni, Ornella Vanoni, Zucchero, Vasco Rossi, Edoardo Bennato, Mia Martini, Loredana Berté, and Alberto Fortis. She entered into a brief personal and musical relationship with Fortis, whereby he helped her compose and produce her first single "Didin" (1982).

Her debut album "Rossana Casale" (1984) contained six songs and displayed a melodic jazz style that was commercially appealing and sold 50,000 units. The recording featured instrumental and production contributions from the legendary Premiata Forneria Marconi band and earned the "Premio Vela d'Argento" (Silver Sail Award) from the "Riva del Garda" Artistic Festival & Competition. Rossana also recorded and contributed the songs "A tu per tu" and "L'incanto" to the soundtrack of the 1983 dramedy film "Una gita scolatsica" written and directed by Pupi Avati. She then commenced a successful collaboration with the songwriting team of Maurizio Fabrizio and Guido Morra; signing on with major label PolyGram Records. This relationship yielded immediate returns as she received her first invitation to the 1986 Sanremo Music Festival and presented the song "Brividi" which was written by them. Rossana participated in the Premiatissima '86 Television Music Competition in October of that year, and captured first place with another Fabrizio-Morra song, "Nuova vita," which found its way onto her second album "La via dei misteri" (1986).

She returned to Sanremo in 1987 and presented another composition by the prolific songwriters, this one entitled "Destino." Shortly after the festival, her second recording was re-issued with the addition of her two previous Sanremo songs and was warmly received by the public and critics alike. Rossana received an invitation to appear at the prestigious Umbria Jazz Festival which afforded her the opportunity to display her expressive jazz vocalizations. This experience led to a personal renaissance whereby she underwent a transformation from pop singer to jazz chanteuse. This change was best displayed by her third appearance at Sanremo in 1989 as she presented the jazz-inspired number "A che servono gli dei" and was clearly evident with the release of her third album "Incoerente Jazz" (1989) which contained several songs that she composed herself.

The richly-textured recording featured contributions from over a dozen artists including England's Gawin Wright Strings Orchestra. Rossana released her first "raccolta" (greatest hits album) entitled "Frammenti" (1989) later that year and embarked on a tour throughout the peninsula performing in small clubs and theaters. These were her preferred venues as they allowed for personalized and intimate performances. Continuing with her musical evolution, she returned to Sanremo in 1991 and presented the song "Terra" which now featured a sound that fused elements of jazz with international sonorities as she was accompanied by Senegalese vocal group "I Toure Kunda." The song was well received and made its way onto her fourth studio album "Lo stato naturale" (1991) which continued her attraction to jazz-driven, ethnic melodies. The recording also contained several songs written by her and she assumed a larger role in the final production process. She next joined forces with noted female Italian pop artist and colleague Grazie Di Michele and together they authored nearly all the compositions contained in Rossana's fifth studio album, "Alba Argentina" (1993). Together they also presented the hit single "Gli amori diversi" at the 1993 Sanremo Music Festival and captured third place among the 15 contestants. She completed the remaining decade of the 20th century by releasing "Jazz in Me" (1994), "Nella notte un volo" (1996) and "Jacques Brel in Me" (1999).

Each album presented a unique sound; the first being her first completely jazz-only recording, the second saw her return to her pop roots and the third a tribute to the late, great Belgian singer/songwriter which contained Italian versions of his greatest hits. During the new millennium, Rossana continued her diverse approach to recording by releasing "Strani Frutti" (2000) which payed homage to the legendary femme-fatale torch singers including Janis Joplin, Mia Martini, Edith Piaf, Marilyn Monroe, Judy Garland, and Dalida. Her 10th studio album "Billie Holiday in Me" (2004) was another tribute album; this one honoring the legacy of the legendary mid-twentieth century jazz vocalist. "Circo Immaginario" (2006) was her 11th album and introduced her fans to new music styles derived from the Balkan and the Far East cultures and was inspired by the novel of the same name written by Italian author Sara Cerri.

Rossana also participated in the summer 2009 "Amiche Per l'Abruzzo" concert at San Siro Stadium in Milan, which sought to raise awareness and funds for the victims of the tragic earthquake that devastated the city of L'Aquila in the early morning of April 6. Rosanna also made several television and theatrical appearances exhibiting her comedic and dramatic range of talents and also served as a "coach" on the Italian X-Factor talent competition.

Her last two recordings "Merry Christmas in Jazz" (2009), which contained jazz-flavored Christmas classics and "Il signor G e l'amore" (2014), another tribute album and her 13th overall, honored the memory and legacy of legendary Italian singer, songwriter, musician, actor, and playwright, Giorgio Gaber. Rossana was most recently seen participating in a musical memorial celebration of the 10 year anniversary of the death of another legendary Italian performer, Sergio Endrigo.

For more information you can visit her website at www.rossanacasale.it.