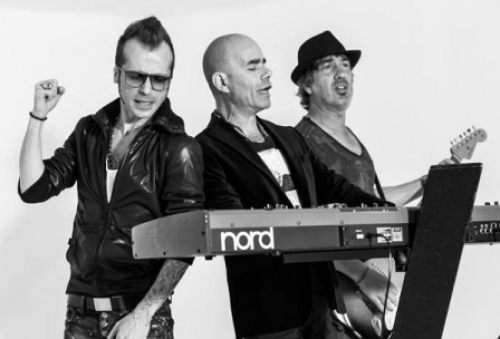 Italy, a land steeped in tradition and culture, and once the home of the ancient Roman Empire, only became a unified nation just over 150 years ago, on March 17, 1861. The country has a relatively short history when compared to most of its European neighbors and as a nation-state it is even younger than the U.S. The movement for unification, known as the "Risorgimento," struggled to liberate the country from foreign rule and unite the patchwork of city-states and regions that had been ruled by the pope and a variety of other monarchs. Today, although united, the peninsula maintains its diverse regional customs and flavors. The distinct languages and culinary specialties add to the charm and diversity of this boot-shaped nation.

The ethno-pop group Tazenda was established on the island of Sardinia in 1988 by founding members Andrea Parodi (lead vocalist), Luigi "Gigi" Camedda (keyboards and vocals) and Luigi "Gino" Marielli (guitarist, vocals and principal songwriter). Their inimitable sound has always been characterized by their unique harmonic singing technique which combines their tenor, baritone and bass vocal styles interspersed among a mélange of vintage acoustic instruments such as "launeddas" (a Sardinian woodwind instrument), diatonic accordion, cembalo, tamburello, and mandocello juxtaposed alongside modern electric guitars, synthesizers and drums. Their compositions usually feature lyrics in their native "Logudorese" dialect of the Sardinian language with an occasional smattering of Italian verses accompanied by traditional folk sonorities. Their unusual name was inspired by the fictional planet referenced in Isaac Asimov's science-fiction novel "Second Foundation."

Their eponymous debut recording "Tazenda" (1988) sold over 60,000 copies and would contain two of their most important works. The first number, "Carrasecare" was presented on the RAI network talent competition broadcast of "Gran Premio," hosted by legendary television personality Pippo Baudo, and captured first place. The second song, "Non potho reposare," would become their signature anthem and remains an integral part of their live show. Their second album "Murales" (1991) sold over 200,000 copies and featured the hit single "Spunta la Luna dal monte" which was performed in unison with legendary Italian vocalist Pierangelo Bertoli. The song was presented at the 1991 Sanremo Music Festival and finished in fifth place among the 20 entries and later received the "Targa Tenco" music award in the category of "La Miglior Canzone Dialettale dell'Anno" (Best Dialect Song of the Year). Their third album "Limba" (1992) contained the moving ballad "Pitzinnos in sa gherra" (Children of war), written by legendary Italian artist Fabrizio De André and was presented at the 1992 Sanremo Music Festival. It finished in eighth place among the 15 contestants.

The group had always been a touring outfit, so it was no surprise that their next album "Il popolo rock" (1993) would be a live recording capturing the band at its most dynamic moments during the many performances throughout their homeland and on the main peninsula. The band's fourth studio album "Fortza Paris" (1995) was a radical departure from the previous works as the album was recorded in the U.S. under the guidance of noted Italian record producer Corrado Rustici and the songs contained therein were composed and more evenly divided between the two languages. Tazenda's tours now took them throughout the entire European continent, the British Isles and included stops in Australia, and North and Central America. Their next album "Il Sole di Tazenda" (1997) was their first "raccolta" (greatest hits). This recording would be the last to feature the vocal talents of Andrea Parodi as he would leave the group later that year to pursue a solo career. The remaining members chose to forge on ahead as a twosome but the results were lukewarm, at best. The post-Parodi years of 1998 through 2005 featured only two new recordings; "Sardinia" (1998) and Â¡Â¡Â¡Bum-ba!!! (2005) with the former displaying exclusively Sardinian language lyricism and the latter curiously incorporating several Latin-American numbers written in Castilian Spanish.

The exhausting touring schedule was beginning to sap their creative energy as the remaining two were forced to share the challenging lead vocal duties. It was with great relief and pleasure when Andrea Parodi accepted an invitation to re-join the band for the autumn portion of their 2005 tour and, although he was in the midst of a courageous battle with cancer and despite his condition, the energy and passion that he exuded yielded some of the group's finest moments in a live setting which had not been seen in recent past years. Their sold-out performance at the "Anfiteatro romano di Cagliari" on Sept. 23, 2005 was captured on the live recording "Reunion" (2006). Nearly one year later on Sept. 22, 2006, Andrea made his last appearance on stage in public at that same venue. He would die shortly thereafter on Oct. 17, 2006. The short time spent with Andrea after his return convinced the remaining members to add a new dedicated frontman to replace him and assume his lead vocal duties thereby allowing Gigi and Gino to concentrate on their technical specialties which included songwriting and the production of their own recordings.

Giuseppe "Beppe" Dettori was selected for the daunting task of replacing the group's charismatic and beloved leader. What followed was a productive and enjoyable period from 2006 through 2012 whereby the infusion of new blood re-energized Tazenda and they resumed their successful collaboration with other important Italian artists such as Gianni Morandi, Paola Turci, Mauro Pagani, Maria Carta, Eros Ramazzotti, and Francesco Renga. Their seventh studio album "Vida" (2007) was among their best-selling releases ever, achieving platinum status and selling over 100,000 units. The hit single "Domo mia" performed in unison with Italian pop legend Eros Ramazzotti enjoyed an extended stay on the music charts. Their eighth studio album "Madre terra" (2008) saw their good fortunes continue as it remained on the charts for several months and achieved gold status. Their next album "Ottantotto" (2012) was another popular recording and earned the group critical praise but the rigorous routine of recording and touring, as well as artistic differences, took its toll on Dettori as he chose to leave the group in the fall of 2012 to embark on a solo career.

Tasked with having to replace their lead singer again, Gigi and Gino wasted no time in auditioning possible candidates. The criteria: a male singer of Sardinian descent who could assume the challenging tenor vocal responsibilities. In March of 2013, as the group enters into the third phase of their existence, they introduced the comparatively young native of the seaside city of Alghero, Nicola Nite. After performing live with their new lineup, the group is now currently in the process of recording their next album which will feature the writing skills of the legendary songwriter Giulio "Mogol" Rapetti and therefore feature, for the first time, Italian as the predominant language.

For more information you can visit their website at www.tazenda.it.