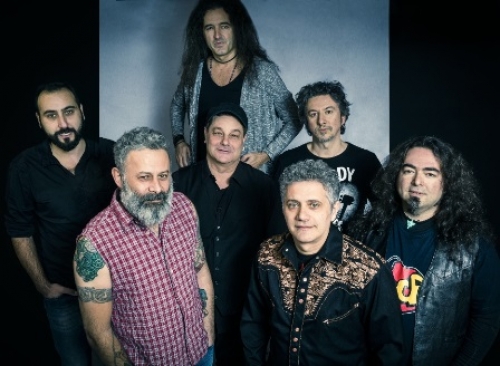 The Modena City Ramblers are a band that traces their origins to the province of Modena, which is nestled in the heart of the northern region of Emilia-Romagna. Known as MCR, they never sought the sterile and commercial approach to crafting their message. They have instead embraced their multi-ethnic roots and poly-instrumental talents to address current "hot-button" societal issues that plague civilization. Early incarnations of the band began taking shape during the winter of 1991, and for the next few years, they maintained a loose and informal alliance of transient artists as opposed to a more conventional ensemble. They drew their inspiration from the Irish Celtic punk band "The Pogues" and their name was selected in honor of the Dublin City Ramblers, a legendary Irish folk band. MCR forged their own unique sound by melding together elements of Italian folk melodies with British punk rock while utilizing diverse acoustic-style instruments such as the bouzouki, mandolin, violin, woodwinds, brass, banjo, sitar, bagpipes, and accordions.

Their debut recording "Combat Folk" (1993) was an extended play (EP) demo that contained an eclectic potpourri of politically motivated originals and several well-known Irish instrumentals. The album's title gave rise to a new musical genre which soon inspired the formation of numerous other emerging musical groups. Lacking an organized system of distribution, the recording was sold exclusively at their live performances and was enthusiastically received by the public and the pundits alike. Emboldened by this unanticipated but welcome success, MCR returned to the studio to release their first full-length album "Riportando tutto a casa" (1994) on the fledgling independent Roman music label Helter Skelter Records.

With this recording, the group refined their unique "sound" and even recorded three of the thirteen tracks in their native Modenese dialect. MCR embarked on a modest tour in support of the release and, upon their return, found themselves in high demand over the entire course of 1995 for collaborative projects with other musical groups. The band eventually returned to the studio in the spring of the following year and recorded their second album "La grande famiglia" (1996). The generous contributions of guest artists, inspired lyricism and maturing musicianship contributed to the commendable quality of the recording. The cost of success, however, came at a high price as several core members would leave the band due to various artistic and personal reasons. The addition of new members brought indispensable stability and re-kindled the group's creative energies.

Their third album, "Terra é libertà" (1997), was profoundly inspired by several members' personal experiences while vacationing in Central and South America and displayed Latin rhythmic influences. The final stop on their inaugural international excursion concluded in Cuba in December of 1997 in front of an audience estimated at 100,000. Upon the completion of their successful but hectic tour, MCR returned to Italy to enjoy the holidays and reflect upon their growing popularity. The band felt a longing for a return to their roots and agreed to spend the ensuing months performing acoustic sets in smaller and more intimate venues. The resulting symbiosis between them and their audiences, which had been missing during their arena and stadium performances, re-energized the group.

The preceding experience motivated the band to release their fourth studio album "Fuori campo" (1999), which featured their most diverse arrangements ever. Their last act before the end of the decade was to publish their autobiography "Combat Folk - L'Italia ai tempi dei Modena City Ramblers" co-authored with Paolo Ferrari and Paolo Verri in November of 1999. The band's next two albums, "Radio Rebelde" (2002) and "Â¡Viva la vida, muera la muerte!" (2004) contained songs which presented a new musical genre called "Patchanka" which was a mixture of diverse international music styles including folk, reggae, rock, acoustic, and ethnic sonorities. The single "Ebano," which appeared on the second recording, received Amnesty International's Premio Voci per la libertà (Voice for Liberty Award), acknowledging its lyrical content which raised the awareness of and defended against the violation of human rights.

The DVD "Clan Banlieue" was released by Universal Music in 2004 and documented the band's 12 year music career highlighting their songs, concerts, travels, and encounters. MCR released their eighth studio album "Appunti Partigiani" (2005) and invited ex-members and long-time colleagues such as Francesco Guccini, Piero Pelù, Ginevra Di Marco, and Paolo Rossi to provide backing vocals on many of their greatest hits. The band's ninth studio album "Dopo il lungo inverno" (2006) experimented with new orchestral arrangements including the Original Kocani Orkestar Brass Band from Macedonia and The Koiné String Quartet from Reggio-Emilia. MCR's tenth album "Bella Ciao - Combat Folk for the Masses" was specifically produced as an introductory recording for the untapped international markets in Holland, Switzerland, France, Germany, Austria, and Luxembourg.

The core of the band was beginning to coalesce and they expanded their skill sets to learn new instruments and provide backing vocals. "Onda Libera" (2009) and "Sul tetto del mondo" (2011), the band's 11th and 12th releases, featured MCR assuming greater roles in the production and arrangement of the recordings. Subject matter for the albums remained as diverse as ever, yet always with an eye toward human conditions and experiences. The band's 13th recording, "Niente di nuovo sul fronte occidentale" (2013,) was their last studio album of original music and was released in a double CD format, with the first labeled "Side A - Niente di nuovo" which displayed an aggressive electric style and the second labeled "Side B - Sul fronte occidentale" which featured a more acoustic poetical sound.

Their last two albums "Venti" (2014) and "Tracce Clandestine" (2015) are both "raccolte" (greatest hits compilations); the former, a live recording which celebrated their 20 year career and the latter, a studio remix with numerous guest artists. MCR's characteristic determination continues to be exhibited by their clear focus, stubborn resilience and devoted belief to the cause of justice, freedom and equality in spite of the obstacles they encounter by using their music as a method of expressing their commitment to their ideals. For more information you can visit their website at www.ramblers.it.