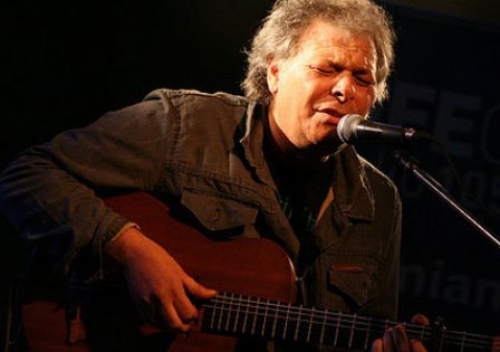 Success is a fleeting, double-edged sword that can change a person's outlook and perception of themselves and their surroundings in either a constructive or destructive manner. Some emerging artists fail to heed the proverbial "Be humble or you will stumble." The career of Neapolitan singer/songwriter and guitarist Enzo Gragnaniello epitomizes the positive accomplishments that an individual can achieve in spite of the negative environment and experiences to which one is exposed.

Enzo was born in tenement housing found on the narrow streets of "Vico Cerriglio" (Cerriglio Alley) within the impoverished and crime-ridden neighborhood of the "Quartiere Spagnoli" (Spanish Quarters). His early childhood was spent in transition as his family moved throughout the area in search of opportunities for a better life. Later in life, Enzo began working various menial odd jobs seeking to achieve some aspect of independence. During his off-hours he invariably found himself being drawn to the local live music circuit as he accompanied older friends and even strangers to underground clubs and venues. Growing up in a hostile environment that was overrun by the Camorra mafia crime syndicate, he began teaching himself the guitar by age ten, using many of these unpleasant adolescent experiences as inspiration and motivation to begin expressing his latent feelings through his music.

At 18, he was authoring his initial compositions and continued to nurture this talent, sensing an opportunity to improve his social status. Some of his early works predictably dealt with themes of poverty, anger, crime, and despair, but were often offset by other songs of courage, faith, hope, and love. He formed his first band "I Banchi Nuovi" in 1977 and sought to forge a new musical style that fused elements of contemporary melodies with Neapolitan lyrics. The results were encouraging and lead to an appearance at a festival in Berlin that celebrated popular European traditional music.

Buoyed by this successful international experience, Enzo continued refining both his performing and songwriting skills and released his eponymously-named debut album "Enzo Gragnaniello" (1983). The recording contained ten songs written in Neapolitan, exhibiting a basic acoustic folk style accompanied by his impassioned vocals as he courageously espoused socially-conscious subject matter. Enzo's second album "Salita Trinità degli Spagnoli" (1985) was named after the street that he still lives on to this day and continued his commitment towards humanistic themes. Enzo's vocal style remained virtually unchanged but his sound evolved to include new international sonorities including African rhythms and Latin beats. Most importantly, in 1986, he earned the first of his three prestigious "Targa Tenco" music awards for his composition "Giacomino" which captured first place in the category of "La Miglior Canzone Dialettale dell'Anno" (Best Dialect Song of the Year).

Enzo concluded his association with the DDD (Drogueria di Drugolo) music label after these two albums and would not return to the recording studio for five years. After an extended hiatus of rest and reflection, Enzo underwent a personal revitalization and consciously sought to reach new audiences with his simple, yet heartfelt, style. He signed on with Mercury Records in 1990 and began the most prolific period of his career as he released four albums over the next five years. His third album "Fujente" (1990) contained the title track which earned Enzo his second "Targa Tenco" award for Best Dialect Song of the Year. Enzo continued advocating his unique approach to songwriting and released his fourth album "Veleno, mare e ammore" (1991) and saw his popularity expand beyond the borders of Naples. His next two albums "Un mondo che non c'é" (1993) and "Cercando il sole" (1994) were both radical departures from his normal approach to crafting music as he shifted his emphasis toward composing pieces in the Italian language which, until up to that point, he rarely attempted. The results were positive as a new legion of fans all throughout the peninsula became drawn to his musical style. Enzo also launched a successful collaborative career as he authored the songs for other established Italian artists including "Stringi di più" and "Donna" for Mia Martini, "Alberi" for Ornella Vanoni, "Cercami" for Adriano Celentano, "'O mare e tu" for Andrea Bocelli, "Sta musica" and "Cu âmme" for Roberto Murolo; the second of which he sung as a duet with Mia Martini and would become a huge hit that would also be translated into Spanish and French.

Out of deep respect to his Parthenopean heritage, Enzo released his personal homage to classic Neapolitan songs in his first cover recording "Posteggiatore abusivo" (1997). Adding to his curriculum vitae, Enzo signed on to Caterina Caselli's Sugar label and recorded "Neapolis Mantra" (1998), a completely instrumental album of ethnic-based sacred hymns and songs. Enzo's final recording of the decade, "Oltre gli alberi" (1999), earned him his third and final "Targa Tenco" music award for first place in the category of "Il Miglior Disco Dialettale dell'Anno" (Best Dialect Album of the Year). He also received his first invitation to the prestigious 1999 Sanremo Music Festival where he performed his composition "Alberi" as a duet with the legendary Ornella Vanoni and captured fourth place among the 14 contestants.

Enzo's first two releases in the new millennium each displayed new sonorities as compared to his previous body of work. "Balia" (2001) contained overtones of diverse Mediterranean influences while "Tribù e passione" (2003) was performed in a funky-jazz key and featured the talents of legendary Neapolitan musicians James Senese on saxophone and Rino Zurzolo on bass. The next two recordings "Quanto mi costa" (2005) and "L'erba cattiva" (2008) earned critical acclaim and were among his best-selling recordings to date as he returned to his familiar Neapolitan-themed writing style.

Enzo's last two recordings "Radice" (2011) and "Misteriosamente" (2015) featured collaborations with fellow musical contemporaries including Franco Del Prete, Piero Gallo, Raiz and Nino Buonocore. Both recordings were a culmination of his experiences over the course of his 30 year professional music career and have been warmly received by critics and fans alike.

He is now on tour throughout Italy in support of his latest release. For more information you can visit his website at www.enzogragnaniellomusic.com.