A Taste of Calabria 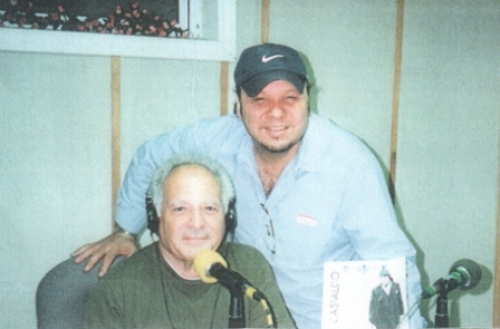 A Taste of Calabria

Everything really does happen for a reason

We use many familiar catch-phrases or expressions to explain away the many ordinary and not-so-ordinary occurrences in our daily lives. "A place for everything and everything in its place" and "To everything there is a season, and there is a reason for every season" are two that come to mind. Calabrian-born, Canadian-raised and American-seasoned recording artist michéal CASTALDO's latest project "Everything Happens for a Reason" may very well become a new addition to the vast lexicon of familiar colloquialisms.

Most certainly it has a very good chance of developing into that new melody that, once heard, will be indelibly etched into your synaptic pathÂ¬ways that then becomes difficult to get out of your mind. His classic upbringing in a tight-knit and tradition-rich Calabrian-based Italian family, coupled with his own personal work ethic, laid an important foundation in the development of his artistic career.

While the smell of bergamot oranges and ripe olives permeated his soul, his life-long musical collaborations would enrich his repÂ¬ertoire and his formal training at Boston's Berklee ColÂ¬lege of Music would sharpen and refine the man as we know him today.

His musical journey has had many stops along the way, beginning with his initial foray into the cutting-edge, pop-rock sensibilities of his first two reÂ¬cordings "Only Human" (1994) and "Gioia2" (2002). The adventure then piqued his passion for a personalized interpretation of Italian and Neapolitan classics with the release of "Villa" (2004) and "La dolce vita ânAmerica" (2007). His next three albums "Aceto" (2010), "Extravergine" (2011) and "Olive You" (2012) were unbridled destinations of his heart and soul, and, through them, he reflected upon his many expeÂ¬riences.

Feeling compelled to bring the train back to its origination, michéal authored his pièce de résistance "Bergamot" (2013), throwing caution to the wind and reverting back to his earlier avant-garde style by releasÂ¬ing a personal collection of originals and covers flavored in a Calabrian-language interpretation. The results were most satisfying and re-affirmed his extraordinary artistic expression and charismatic finesse. Now a new chapter awaits us all with the official release of his new single "Everything Happens for a Reason" scheduled for presentation on May 5, 2015. The song, which will be available in English and Italian and in different musiÂ¬cal arrangements, contains elements of a new, yet familiar, rhythmic musical score featuring a pulsating and infectious beat coupled with optimistically-rich lyricism that is sure to remind us all repeatedly and most assuredly that "Everything really does happen for a reason."

A true legend of many musical experiences

These days, the term "legend" has been bandied about so regularly and is quite often misapplied that its usage has now approached cliché status when describing someone of extraordinary talent and exÂ¬tensive experience in a particular field of occupation. The function of distinguishing good talent from truly gifted individuals is no longer a routine task. The lines have been blurred and for sake of convenience we simply apply the term indiscriminately.

One individual who has earned the right to be classified as a "legend" in his area of expertise is Calabrian-Canadian author, lyricist, music publisher, record pro-ducer and radio personality, Mario Marasco. His fifty-year professional music career is replete with numerÂ¬ous accomplishments including personally develop-ing, sustaining and promoting the market for nascent and established Italian musical talent.

He has auÂ¬thored many hundreds of songs over his career and he has received international accolades and awards for his musical and poetry compositions in Switzerland (Music Festival of Lugano), Italy (Sanremo and Napoli Music Festivals) and North America (Voce d'Oro Literary Competition). MarÂ¬io is the founder and executive director of RiviÂ¬era Records and Riomar Music Publishing. He has collaborated with scores of artists and fellow songwriters and patiently offers his sage advice and thoughtful guidance seeking the very best results for everyone that he meets. Mario has also co-produced the soundtracks to several movies and has broadened his scope to assist artists outside the sphere of Italian music.

Born in the small "comune" of Decollatura within the province of Catanzaro, nestled in the heart of the region of Calabria, Mario's background has always revolved around music as his father and brother were both professional musicians. His early works as a child were literary compositions that reflected a special and compassionate youth who would later on, as a teenagÂ¬er, eventually gravitate toward the field of journalism.

Upon reaching adulthood, Mario found his true calling as a musical composer; a lifetime endeavor from which he has never looked back with any regret, whatsoever. The themes of his songs are as diverse as the people he has met and have touched the full spectrum of emoÂ¬tions including, joy, sorrow, happiness, pain, success, failure, and, above all, love. Mario found a logical home on the radio airwaves and has been involved with terrestrial and now internet broadcasting for over 45 years, promoting much of his repertoire and that of those who have had the privilege and pleasure of collaboÂ¬rating with him.

He has been acknowlÂ¬edged by his peers for his important contributions to the public broadcast sector with numerous awards over the years. While others have chosen to seek respite from the demanding schedule that this medium dic-tates, Mario has chosen to remain a relevant and imÂ¬portant voice on the Italian music horizon in both CanaÂ¬da and Italy. His exploits have more recently brought him south of the border, to the United States, as he emÂ¬barked on the mission of spreading the joyful sounds of Italian music in its many different forms to new friends throughout the American Midwest and the East Coast. Mario has also authored a publication of poetic works contained in the anthology entitled "L'anima del po-eta" (1995). For more information you can visit his busiÂ¬ness website at www.rivierarecords.ca or his Facebook page Mario Cico Marasco.

Tweet
More in this category: « East side, West side, all around the town... Opera in the Italian Garden »