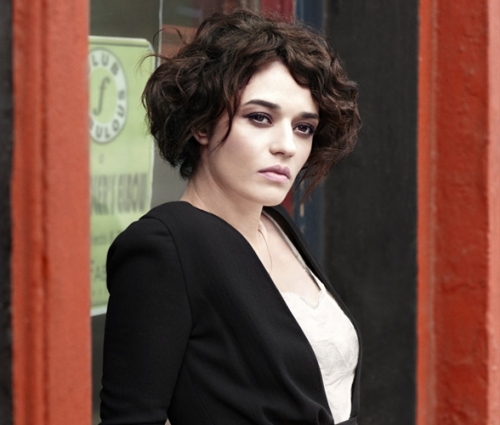 Success in the competitive world of music is measured in different ways. For some, it is the skill to author compositions, which touch the masses. For others, it is the ability to enchant their followers with charismatic charm. For the rest, it may be the capacity to astound their audiences with sheer raw talent. For Sicilian-native singer/songwriter and guitarist Carmen Consoli, it is a combination of all these attributes.

Born in the small town of San Giovanni La Punta in the province of Catania on September 4, 1974 her childhood was profoundly enriched by her exposure to a variety of musical styles. She credits renowned recording artist Domenico Modugno as one of her early influences and was also drawn to soul and rhythm-n-blues. Her father, Giuseppe, encouraged her to study music theory and composition while still in grade school. By age nine she was already playing the guitar and began performing in clubs at 13, specializing in American-styled blues-rock. She later completed her formal studies and majored in computer sciences.

Consoli moved to Rome for a brief time to present her compositions to record labels and even made a brief appearance on a television special that paid tribute to Mia Martini on the RAI Tre program "Tempo Reale". Returning to Catania she enlisted the services of producer Francesco Virlinzi, founder of Cyclope Records. At that time, Consoli partook in another tribute project, this time honoring the career of fellow-Sicilian and legendary recording artist Franco Battiato. She was invited to participate in the prestigious 1996 Sanremo Music Festival and competed in the "Categoria Giovani" (Newcomers Category). Her song, "Amore di plastica" was co-authored by Mario Venuti and fared well. It received substantial airtime later that spring and found its way onto her debut recording "Due parole" (1996). The album garnered critical praise and was cited for its distinctive vocal, compositional and interpretive qualities.

Following the release of her album, she went on tour and was selected as the opening act for Italian recording artist Raf. She returned to Sanremo in 1997 and presented the song "Confusa e felice". Although her entry was eliminated after the first round, it ended up becoming the title track on her next album. The recording also contained the surprise hit "Venere" and went on to 120,000 units, achieving platinum status. Later that year she received the exalted "Premio Italiano della Musica" (Italian Music Award) for "Rivelazione dell'anno" (Revelation of the Year).

Her third release, "Mediamente isterica" (1998) was another commercial success as it also achieved platinum status and featured a harder-edged rock sound then her earlier works. The album yielded four singles and contained songs that dealt with mature social themes including human servitude, war-ravaged areas, spousal infidelity, and abuse. The release was then followed by a yearlong European tour.

Upon her return to the studio she began the new millennium by releasing her paramount work to date, "Stato di necessità" (2000). The recording sold over 250,000 units and yielded four more hit singles including, "Parole di burro" and "L'ultimo bacio". She also returned to Sanremo that year and presented the song "In bianco e nero" which finished in seventh place among the sixteen entries. That year she also earned two more major awards, "Artista femminile dell'anno" (Female artist of the Year) and "Miglior artista femminile" (Best female artist). Sadly however, her friend, producer and fellow Catania-native, Verlinzi died later that year of an incurable disease at the young age of 41.

Courageously she continued on in his memory and went out on tour in support of this release with the highlights captured on her first live recording "L'anfiteatro e la bambina impertinente" (2001). The album sold over 200,000 units, achieved platinum sales and featured a full orchestral accompaniment. Later she re-released an international version of the recording in France.

In 2009, she was invited to participate in both the "Domani - Artisti Uniti per l'Abruzzo" and "Amiche per l'Abruzzo" productions that sought to raise awareness and funds for the victims of the April 2009 earthquake of L'Aquila. Her most recent recording is her first greatest hits compilation, a double CD album entitled "Per niente stanca" (2010). The release achieved gold status and contains 40 of her best compositions spanning her 15-year career.