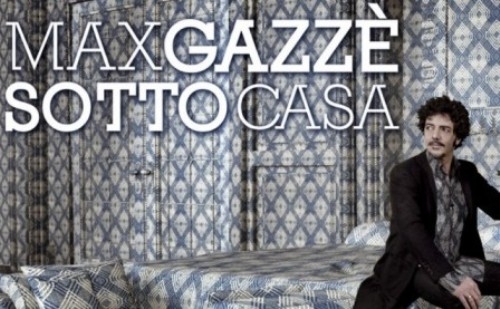 The sum of the parts that comprise the whole being of Italian singer/songwriter and bassist Massimiliano Gazzé is replete with the sights, sounds, flavors and experiences of a lifetime spent in foreign countries, perpetually on the move.

"Max", as he is better known, was born in Rome on July 6, 1967 and spent the better part of his infancy in Brussels, Belgium. His father, who was originally from Sicily, sought employment opportunities outside the Italian peninsula. Gazzé was immediately enrolled in a private "Scuola Europea" (European School) whose curriculum provides an intense education solely for the children of institutional personnel and requires the students to master multiple languages.

He began studying the piano at age six and later as a teenager, concentrated on the electric bass guitar. Soon he was performing in local bands, experimenting with the classic "northern soul" sound that originated in England in the 1960s and later gravitated toward the newer "acid jazz" genre that was popular throughout the United Kingdom during the 80s and 90s. His group "4 Play 4", in which he was the principal arranger and co-writer, moved to France for increased exposure and performance opportunities. Frequent stops included clubs and theaters throughout the Netherlands. Gazzé also found work as a successful artistic producer for other aspiring artists.

His travels eventually led to his return back to Rome in 1991 as he sought to concentrate on developing new and experimental sonorities in his home studio and continue songwriting by composing soundtrack recordings. Gazzé also collaborated with other emerging musicians such as Alex Britti, Niccolò Fabi and Daniele Silvestri. Throughout 1994 and 1995 he began laying the groundwork for his debut album "Contro un'onda del mare", which was released in January 1996 on his new label, Virgin Music Italia. The recording received positive critical acclaim and garnered moderate sales.

Consequently, Gazzé was then chosen as the opening act for legendary Italian songwriter Franco Battiato's "L'imboscata Tour". Upon his return from the road, he composed the hit single "Cara Valentina" from his second album "La favola di Adamo ed Eva" (1998). The release also contained the hit single "Vento d'estate" which he co-authored with his friend Niccolò Fabi and went on to capture first place at the "Un disco per l'estate" music festival later that year. His good fortunes continued as he was invited to participate at the prestigious 1999 Sanremo Music Festival, in the "Categoria Giovani" (Newcomer's Category). His entry "Una musica può fare" finished in eighth place among the 14 contestants and after the competition he went out on tour in support of the release.

Gazzé began the new milennium by releasing his third recording "Max Gazzé" (2000) which displayed profound poetic lyricism and a unique self-expressive musical style that he had been perfecting over the years. The album's first single "Il timido ubriaco" was entered into the 2000 Sanremo Music Festival and finished in a respectable fourth place among the 16 contestants in the "Categoria Campioni" (Champion's Category).

Another lengthy tour throughout Italy and parts of Europe exposed Gazzé to new legions of fans and upon his return to the studio where he enlisted the help of his brother, Francesco, to assist with the songwriting duties. His fourth release, "Ognuno fa quello che gli pare?" featured collaborations with some of the best and brightest Italian artists at that time, including Paola Turci, Carmen Consoli, Francesco Magnelli and Ginevra Di Marco.

For the next few years, Gazzé reduced his personal recording schedule to concentrate on club venue performances, theatrical-style touring and guest appearances on fellow artist's recordings. His fifth recording "Un giorno" was released until April 2004 and featured the talents of some of Italy's top studio musicians who even accompanied him on tour. In celebration of his tenth anniversary of recording, he released a greatest hits compilation, "Raduni 1995-2005". Gazzé returned to Sanremo in 2008 and presented the song "Il solito sesso" which he performed as a trio along with Paola Turci and Marina Rei on the "Serata Duetti" (Duets Night). His sixth studio release "Tra l'aratro e la radio" (2008), contained themes of social decay and diminishing natural resources. The album also featured the talents of noted female artists and friends, Turci, Rei and Consoli. His last two recordings "Quindi" (2010) and "Sotto casa" (2013) display new and maturing approaches to recording as he delved into new areas of acoustic and folk music styles. He also appeared in Rocco Papaleo's film "Basilicata Coast to Coast" (2010) and provided the musical score for the movie.

Max Gazzé recently finished competing in the 2013 Sanremo Music Festival as he presented two songs "Sotto casa" and "I tuoi maledettissimi impegni". Gazzé is now on a lengthy European tour in support of his newest release.