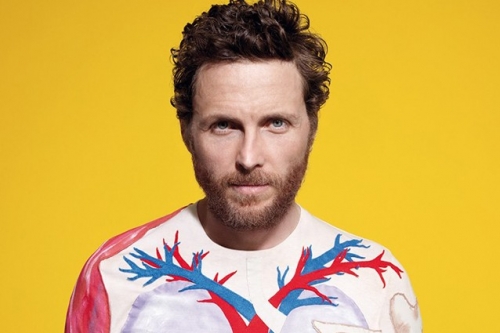 He is one of Italy's most recognized and beloved pop stars. His style is so broad and diverse that it cannot be described with a mere few words. Indeed, trying to identify his motivations or explain the reasons that drive the man known as "Jovanotti" can be difficult, if not impossible.

Lorenzo Costantino Cherubini was the third of four children born to Mario Cherubini and Viola Cardinali in Rome, on September 27, 1966. His family's roots were actually from the town of Cortona, located in the province of Arezzo in the region of Tuscany. As with all immensely talented musical artists, Jovanotti's passion for music began evolving while he was still a child. His first musical experiences were those spent in the discotheques of Rome flourishing as a disk jockey during the early 80s. A chance meeting with legendary record producer and talent scout Claudio Cecchetto in 1987 served as the impetus that eventually launched his new career as one of Italy's first rap and hip-hop recording artists. Originally his stage name was to have been "Joe Vanotti", however a typographical error resulted in it being misspelled as "Jovanotti" on some promotional pieces and oddly enough, Jovanotti took a liking to it and kept it as his new moniker.

His early compositions were high-energy pieces featuring intense, beat-driven rhythms. His debut recording "Jovanotti for President" (1988) was condemned by the critics but became a commercial success selling over 400,000 copies. It yielded five singles and marked the advent of rap sounds as an emerging and important art form. That year, he also published his first literary work, "Yo, brothers and sisters. Siamo o non siamo un bel movimento?"

At the end of the 1988, he began serving his compulsory 10 month military requirement. Upon his return to civilian life, he released his second album "La mia moto" (1989); and as if to prove his earlier success was not accidental, the recording went on to attain sales of over 600,000 units and contained the song "Vasco" which was his tribute to Vasco Rossi. Jovanotti presented "Vasco" at the 1989 Sanremo Music Festival and surprisingly finished in fifth place among the 24 entries. His third album "Giovani Jovanotti" (1990) featured a more commercial pop sound as evidenced by the hit single "Ciao Mamma" along with the musical talents of legendary keyboardists Billy Preston and Keith Emerson. Jovanotti's maturation continued with his fourth album "Una tribù che balla" (1991) which was heavily infused with philosophical, religious, social and political themes. It was during this time that he began his prolific association with popular bassist and songwriter Saturnino Celani which he maintains to this day. The recording also contained compositional contributions from Toto Cutugno and Fabio Concato.

As if to signal a change both personally and artistically, Jovanotti titled his next five studio albums over a ten-year period with his birth name "Lorenzo" and the year of the recording. All these recordings achieved gold or multi-platinum status. He also began sporting a goatee and toured alongside the likes of Luca Carboni, Eros Ramazzotti and Pino Daniele. Jovanotti expanded on his songwriting career by composing songs for artists such as Irene Grandi, Andrea Mingardi, Zucchero and Stadio. During this time he also authored his second book "Cherubini" (1993), launched his own music label "Soleluna" (1994) and became a father with the birth of his daughter Teresa in 1998.

Choosing to relax his recording and touring schedule, Jovanotti became more actively involved with numerous international relief organizations such as Amnesty International, Emergency, Make Poverty History and Live 8. He gladly participated on the recording "Artisti Uniti per gli Zapatisti del Chiapas" which sought to raise capital for the construction of a medical facility in Chiapas, a poverty-stricken region in Mexico. He was also fundamental in organizing the "Domani 21/4/09" music project which sought to procure funds for the victims of the earthquake that struck the south-central Italian region of Abruzzo.

His most recent recordings "Buon sangue" (2005), "Safari" (2008) and "Ora" (2011) were all multi-platinum sellers and also the first to be available as digital downloads. On these albums, Jovanotti continued his association with international guest vocalists and musicians, including Ben Harper, Michael Franti, Sergio Mendes, Juanes and Amadou & Mariam. He also displayed some of his most creative and inspired songwriting during this time as he incorporated international folk-rhythms and ethnic-melodies into his repertoire.

Jovanotti recently experienced the gamut of emotions as he tragically lost his beloved brother, Umberto, in an aviation accident in October of 2007 and later married his longtime companion and mother of his daughter, Francesca Valiani, in September of 2008. Jovanotti has been extensively touring the United States in recent years in hopes of expanding his career into the coveted North American market.

Tweet
More in this category: « Moda', from obstacles to success Pronti? It's Festival Season »