In Montefalco, the Importance of the Heart 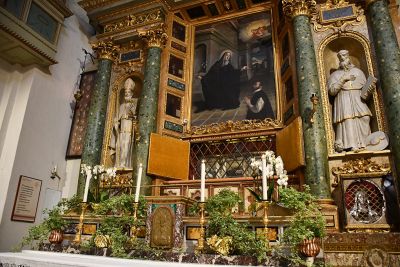 As she opened the cloister door so that we could enter the church, I asked Suora Giacinta how many sisters lived in her Montefalco Augustinian convent. “Ten,” she told me, and added with a wink and a twinkle as she pointed to herself, “and I am the youngest.”

She is a sprightly 90-years-old and had warmly welcomed us into the Barberini (the future Pope Urban VIII).

The church, of severe classical design, was built in the early 17th century on design of Valerio Martelli, a Perugian architect and honorary citizen of Montefalco. A chapel in the right transept is the only remnant of a pre-existing church inaugurated in 1430. The chapel holds the silver tomb displaying the body of St. Clare of the Cross (1268 – 1308), beloved saint of Montefalco. Above the tomb hangs a painting of 1600 depicting St. Clare of the Cross praying as the Lord appears to her carrying His Cross with the committente (the person who commissioned the art) kneeling piously, hands folded in the corner.

Chiara da Montefalco grew up in a wealthy, religious family. Her brother, Francesco, entered the Franciscan order (there were already followers of St. Francis of Assisi in Montefalco as of 1215) while her sister, Giovanna, lived in isolated prayer in a hermitage built by their father in 1271. Chiara later joined her as well as a few other women.

In 1290, the group opted to follow the Augustinian order and their simple hermitage became a monastero (convent) with Giovanna becoming the first badessa (abbess) of their Monastero della Croce. Upon her sister’s death in 1291, Chiara took on the role of abbess.

In 1303, Chiara had the oratory dedicated to the Holy Cross and a few decades after her death, frescos were created in the chapel by an Umbrian painter, many of them depicting episodes of her life.

One fresco depicts her death with Clare seated, surrounded by her consorelle (co-sisters), her Franciscan brother and her confessor (also Franciscan), Fra Tommaso. Clare’s cousin, another Giovanna, kneels in the foreground, her back to the viewer.

A nearby fresco depicts the most salient episode of Chiara’s life, her meeting with Christ carrying His Cross in the cloister garden in 1294. She wished to take the Cross from Him, thus alleviating His pain. It is said that the impress of the signs of the Passion entered her heart. Clare bore pain in her heart for many years and when her consorelle dissected her body the evening of her death, August 17, 1308, they found the imprint of a cross in her heart.

The heart is now displayed in a cross-shaped silver reliquary in the chapel in the church, just to the left of her tomb and below the statue of St. Augustine. Three gall stones were also found during Chiara’s dissection, all equal size and shape and the nuns interpreted them as a sign of the Trinity. The gall stones are in the reliquary as well.

After viewing the relics of Santa Chiara and the 14th century frescoes in the small oratorio, Suora Giacinta invited us into the cloister, showing us with great reverence the remainder of the tree said to have sprouted from Christ’s staff when He met Santa Chiara di Montefalco in the late 13th century.

After our visit to the giardino, we stopped to view the 17th and 18th  century ex-votos (images commissioned for a favor received or to request a favor) painted to thank Santa Chiara or to ask her intercession. The paintings on wooden panels are by unknown artists and each ex-voto depicted Santa Chiara in a nimbus up to the left, holding a lily, the symbol of her purity. In a few of the ex-votos, her heart is visible, the cross imprinted on it.

Before we left the cloister and returned to the main church, Suora Giacinta showed us the elegant vestment embroidered with gold thread, a late 19th  century gift of a Roman princess to celebrate the canonization of Santa Chiara (in 1881). In 1968, the 700th anniversary of her birth, the vestment was removed; it was not considered in harmony with the Saint’s life of poverty and denial.

Mille grazie, Suora Giacinta, for having opened for us doors to many a Montefalco treasure.