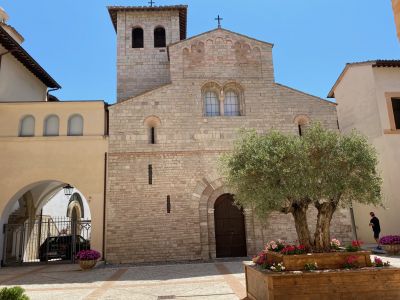 Spoleto’s Church of Sant’Eufemia has been aptly described as “a jewel of a church, situated inside the courtyard of archbishop’s palace and inspiring a profound sense of welcome, fascinating us with its sobriety and the purity of its unadulterated Romanesque style.”

When you enter the Church of Sant’Eufemia, you enter the area of the cappella palatine (palace chapel) of the Lombard dukes who ruled Spoleto from the late 6th century until the early 11th century.

The Lombards, a Germanic people, had invaded Italy in the mid-6th century, conquering much of the peninsula and establishing the Kingdom of the Lombards, divided among several dukes subservient to the King whose seat was in Pavia.

The Basilica di Sant’Eufemia is located near the Cathedral of Spoleto and this area probably once occupied the noble residence of the Lombard dukes and included the chapel of the palace. Adjacent to the chapel dedicated to Sant’Eufemia Vergine e Martire, a 4th century Greek martyr-saint, a Benedictine convent was added, founded by the Badessa Gunderada, probably of German origin.

According to legend, Gunderada also mandated burial of a saintly bishop, Giovanni, martyred by the Goths in the 5th century, in this church which then was dedicated for a period to San Giovanni di Spoleto.

The most ancient document relating to the history of the church was written by a Benedictine monk and historian, Giovanni di Montecassino, in the 10th century when Spoleto was seat of the powerful Duchy of Spoleto.

Above the three naves of the church are the matronei, tribunes or galleries for the nuns. The name, in fact, derives from the word “matrona” (matron). Sant’Eufemia is the only church in Umbria with these elevated matronei.

The Palazzo Vescovile (Bishop’s Palace), started in the 12th century and frescoed in the 15th century, faces the entrance to Sant’Eufemia and as of the late 20th century now houses the Museo Diocesano e Basilica di Sant’Eufemia.

From the courtyard of the Palazzo Vescovile, one reaches the museo through a 16th century portico and then up the stairs to the piano nobile (“the noble floor”) also called “Appartamento del Cardinale.”

After touring the splendid museum collection, entrance to Sant’Eufemia’s matronei is via the most magnificent of all the rooms, the Sala dei Vescovi, “Room of the Bishops.”

Near this room, a passage takes you to the Basilica di Sant’Eufemia with its vaulted matronei and Romanesque arches in local limestone sustained by columns di spoglio, “undressed,” or taken from past monuments. Light enters the church through narrow slit-like windows, monofore, characteristic of Romanesque Lombard architecture.

Around the 15th century, the Spoleto diocese was under jurisdiction of the Patriarch of Alexandria and the church at that time was dedicated to Santa Lucia and its name changed accordingly. In 1450, Patriarch of Alexandria, Venetian Marco Condulmer, commissioned Bartolomeo da Miranda to paint the splendid triptych depicting the Virgin flanked by St. John of Spoleto and St. Lucy (now in the Museo Diocesano).

At the end of the 16th century, the apse of the lower level of the church was painted with an image of God the Father surrounded by cherubs. Originally in the cathedral, the marble altar in the apse is adorned with Cosmatesque (stone mosaic) motifs and five reliefs depicting the symbols of the Four Evangelists and the Lamb of God.

Following the late 16th century earthquake, restructuring was done and at that time, the upper level with the matronei was annexed to the adjacent Bishop’s Palace whereas the lower part was left open for the public.  Extensive restoration was also undertaken in the early 20th century.

The wooden Cristo Triumphans crucifix over the altar is a contemporary copy of the original 13th century one by Byzantine master, Sotio, in Spoleto’s Duomo. Spoleto’s Sant’Eufemia truly is a “jewel of a church.”

View the embedded image gallery online at:
https://www.lagazzettaitaliana.com/travel/9790-sant-eufemia-is-spoleto-s-jewel#sigProIdba283912ec
Tweet
More in this category: « Saints of Montefiascone In Montefalco, the Importance of the Heart »