From Fascism to Tourism: The Foro Italico 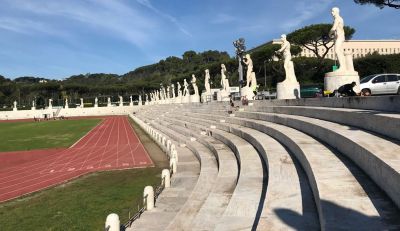 After our return flight to England was cancelled, were we upset? On the contrary, an extra three days in Rome before the next available flight, in glorious sunny weather without the crowds was a bonus. We decided to visit places outside the centro storico where it was likely there would be no tourists at all. We were right.

The Foro Italico, north of the city centre, is one of the few parts of Rome to survive intact pretty much the way Mussolini planned it. Known originally as the Foro Mussolini, it was built from 1928-38, designed by Enrico Del Dubbio and later Luigi Moretti, who created one of Italy’s most important examples of Fascist architecture in order to stage the 1940 Olympics in Rome - though of course that didn’t happen.

We set off on the Metro line A as far as Flaminio, then took a taxi following the Tiber until we reached the Ponte Duca D’Aosta. This bridge acts as the grand entrance to the Foro, with its wide four-lane road supported at each corner by white marble blocks on which are carved reliefs of soldiers in various heroic acts, with horses, machine guns, carrying the wounded, etc., but every one of them spookily has the face of Mussolini himself. At the end of the bridge is a slender, white marble obelisk 17.5m high with the words Mussolini Dux inscribed vertically in beautiful 1930s calligraphy. Beyond that, there is the Stadio Olimpico which hosted the Rome 1960 Olympic Games and is now the venue for international rugby and the home ground for Lazio and Roma football clubs.

The space behind the obelisk leading to the Stadio Olimpico is entirely paved with black and white mosaics of life-size sporting activities. It seems strange in Rome, with all its ancient colorful mosaics, to come across designs which include men in plus fours playing golf! The figures are reminiscent of the paintings of Campigli, neo-classical in style, but I can find no reference to who designed them. In the center is a large marble sphere, a fountain also dedicated to Mussolini, but usually turned off.

On either side of the sports facilities are buildings occupied by Rome University and the Italian Olympic Committee which together make the whole sporting complex known as the Foro Italiaco.

It is the smaller Stadio dei Marmi which really has the wow factor, though. You can almost imagine yourself in ancient Rome, or even Greece, entering an oval green space surrounded by tiers of white marble steps and 60 gleaming white statues of athletic naked young men each 10-feet-high. These sculptures were donated by all the provinces of Italy: the javelin thrower from Puglia, for instance, and the “ball and bracelet” (a renaissance game) from Forli-Cesena. They were all made by different sculptors, but the effect is a harmonious whole and, amazingly, there is no damage or graffiti which sadly these days you come to expect in parts of Italy.

The arena is still used. School parties were running round the track while people in search of a fit body were stretching, jumping and performing various contortions on the marble steps beneath the sculptures.

A little warning: on a sunny day all this white marble is dazzling against a blue sky, so be sure to wear sunglasses; but I understand it is lethally slippery in wet weather.

Artists have given the area the thumbs down because of its fascist origins, but the cancel culture does not seem to have reached Italy. Not only is the area historic and impressive, it is also beautiful, and surely that is what art and architecture are for.

This article, in a slightly different form, first appeared in Italy Magazine.

View the embedded image gallery online at:
https://www.lagazzettaitaliana.com/travel/9712-from-fascism-to-tourism-the-foro-italico#sigProId77040b4da2
Tweet
More in this category: « A Treasure on Piazza Filippo Silvestri in Bevagna The Gardens of the Villa D’Este at Tivoli: Unmissable Without the Crowds »