A Treasure on Piazza Filippo Silvestri in Bevagna 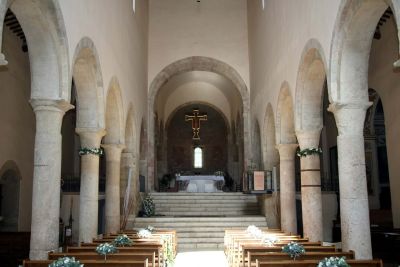 While the Perugian town of Bevagna is home to many architectural and historical treasures, the church of San Michele Arcangelo is one of my favorites. Standing on the Piazza Filippo Silvestri, the church faces another treasure, the Church of San Silvestro. Both were the work of building team Maestri Rodolfo and Binello and were constructed at the end of the 12th century.

The builders of San Michele Arcangelo are lauded in a chiseled inscription to the left of the door, on view for all entering. Above the inscription, Arcangelo Michele, holding an open book, thrusts a lance down the throat of a demon (the devil). The inscription reads: “Rodolfo and Binello made these works; Christ always bless them; St. Michael keep them.”

On the other side of the door, a stern-faced San Michele Arcangelo, wings outspread, clutches an unfurling parchment. The parchment inscription counsels, “Help the poor and give joy to the saints; as the Lord commands, carry the book.”

Three inlaid arches in the white and pink limestone of nearby Mt. Subasio curve over the wooden 17th century doorway, the outer arch enhanced with Cosmatesque mosaic work. A variety of incised stone travertine blocks of recupero (literally, recuperated, meaning recycled from pre-existing structures) frame the doorway, probably architraves from pre-existing Roman temples which were certainly in the piazza area prior to the churches. In fact, a Roman column crowned with a Corinthian capital stands nearby.

Like San Silvestro across the piazza, the interior of this church was built on a basilica plan (wide hall plan), with a raised presbytery over the crypt, the altar backed by a semicircular apse. Arcades of columns, with capitals scraped down for stuccoing during the 17th century Baroque transformation (later eliminated), separate the long nave from the aisles.

Why the Baroque transformation? This church dedicated to San Michele Arcangelo was Bevagna’s first cathedral but “demoted” to simply a parish church by Frederick II in 1248. In 1621, Pope Paul V elevated San Michele to the status of collegiate, that is, a church with a group of canons presiding. Restoration followed with a re-consecration of the church in 1666 with Spoleto’s bishop presiding.

The belltower of the 12th century was modified, its height increased with probable use of the materials first used for the belltower. The medieval rose window, smaller and in lower position on the façade, was replaced with a larger one. Further restoration was undertaken in the mid-18th century and then again in 1834 (after the earthquake of 1832 which also resulted in the “birth” of the Teatro Torti across the piazza).

During restoration from 1951-1957, the wooden roof was added, and the Baroque decoration of the church was removed. This also occurred in the crypt, thus restoring it to glorious vaulted medieval simplicity.

View the embedded image gallery online at:
https://www.lagazzettaitaliana.com/travel/9711-a-treasure-on-piazza-filippo-silvestri-in-bevagna#sigProId509ce83a00
Tweet
More in this category: « Italian Bureaucracy: A Comedy of Errors From Fascism to Tourism: The Foro Italico  »