Italian Bureaucracy: A Comedy of Errors 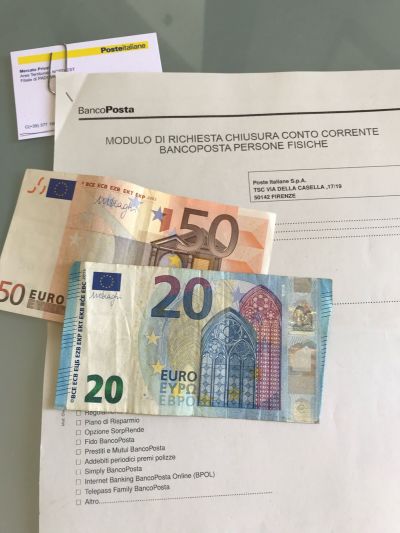 Many La Gazzetta Italiana readers dream of buying property in Italy. It was my dream too, and I have never once regretted my decision to do it. However, with the dream comes legendary Italian bureaucracy, demonstrated in this little, ironic tale!

When I bought my apartamentino in the Veneto 11 years ago, I was advised to open a bank account so that all my utility bills could be paid by direct debit. Otherwise, as I discovered, every time I presented a bill for payment, I had to pay €1.50 tax just for the pleasure of paying it. My neighbors kindly informed me that Banco Posta was the cheapest bank, so I opened an account and for a few years all was well.

On the few occasions when I went into Banco Posta, it always seemed to be badly organized, and I was amazed at the patience of customers queuing for ages with officials in no hurry to be of assistance. The notice not to prop bicycles on the post office wall was, of course ignored, as was any awareness that using a telefonino while being served was a nuisance to others and kept them waiting even longer. The bank would not supply me with a card so that I could have access to my money from a cash machine. This was apparently because I did not have a regular salary coming in each month, but it was still frustrating.

Quickly the bank charges began to increase so that I was often paying more in charges than the actual price of the bills. Admittedly it was convenient, but I reasoned that I could save (despite the payment tax) by paying each bill individually.

Finally, on August 7 last year, I decided to close my account with Banco Posta. The man behind the counter shook his head and informed me that I would have to see the manager, so I asked if I could. “You’ll need to make an appointment.” “OK,” I said. (In Italian, obviously.) “Can I make one?” He told me she was busy, but then she emerged from her office behind him and overheard the discussion. I was invited in rather unconventionally, by stepping into a secure glass cage used for passing large parcels through to the other side. As the front closed, the rear opened, and I was in the secure premises of the post office.

The forms were completed, and I gave my passport number and English bank account details, for a transfer. All seemed to be well, but I should have known better. Over the next four weeks, I kept checking to see whether the money had been transferred to my English account. Nothing. Niente.

Five weeks after my account was closed, I returned to the post office. Only two people at a time were allowed inside because of Covid restrictions, so I waited outside patiently, along with several others. Eventually I reached the counter and spoke to the same rather surly man I had spoken to before. Luckily, as he tried to make excuses, the manager again happened to be passing behind him, and took over my case.

“Yes, Signora, your account was closed on August 28.” “No,” I replied. “The date on this form is the 7th, the day of our meeting.” “Certo, but the 28th was the day the account was officially closed.” Even so, the date was now September 10 and I pointed out that transferring money from my account in England to Italy took me at most 2 minutes. I asked if I could simply have the cash instead. After all, it was my money, not theirs. Not possible, apparently. She said she needed to make a phone call, and wandered off behind the metal filing cabinets to her office, leaving me next to a window marked chiuso. Half an hour later, she returned to explain that the procedure had to go through Rome as it was a foreign transaction. My money should be in my account by Monday. If it did not arrive, could I let her know by text message? I pocketed her card but wondered if this was another delaying tactic because nobody knew how to do it. Feeling pessimistic, I returned to England the next day.

Monday came and went with no activity in my account. I sent texts as she requested, but there was no reply. A neighbor contacted the manager on my behalf. My friend’s email update was terribly apologetic, as if somehow she was responsible for the failings of Banco Posta. I had decided to write to the CEO of Banco Posta, Matteo del Fonte, in Rome. I will be interested to see whether he replies. Eight weeks after they closed my account, the money still had not been transferred.

I love Italy despite its faults, but their bureaucracy is certainly an absolute nightmare. In fact, I know a couple of owners of a trattoria in Monselice who recently emigrated to Australia because they could no longer endure all the paperwork. However, I prefer to look upon this experience as a comedy rather than a tragedy, and nothing – not even ridiculous bureaucracy - will prevent me enjoying my happy life in Italy.

P.S. I am glad that there is a ‘P.S.’  to this tale. The day after I finished writing this article in absolute frustration, I checked my bank account, and there was my money. Though of course I never had a reply from Signor del Fonte. Miracles will never cease. Forza Italia!

Tweet
More in this category: « Tutto Vero, Campobasso in Serie A! A Treasure on Piazza Filippo Silvestri in Bevagna »