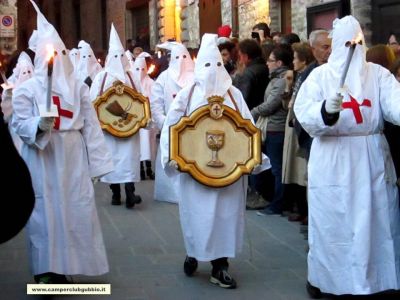 Easter liturgies have incorporated early forms of performances and role-playing, varying from short text passages to long presentations, since the 10th century.

In the 15th and 16th centuries, Passion plays grew into elaborate performances.  Called in Italy sacre rapresentazioni (sacred rapresentations), the combination of liturgy, ritual and theatrical performances often became veritable parts of a liturgical rite and frequently took to the streets in the form of religious processions. One of which is the evocative Processione del Cristo Morto (Dead Christ Procession) on Good Friday in Gubbio,  organized by Confraternita’ di Santa Croce della Foce. Documented as of the 15th century, but probably existing long before, this confraternity is the only medieval confraternity still existing in Gubbio.

These voluntary associations of lay people had focused on the promotion of piety and works of Christian charity and these same confraternities acted out the sacred mystery plays in town squares and on the thresholds of the churches to bring liturgies to life for people at significant moments of the ecclesiastical year. Due to the strong emotions evoked and the complexity of the scenography, the Passion was certainly the most frequently represented play. In Gubbio on Good Friday, the Passion of Christ is the theme of the procession of medieval origin.

Central images in the procession are the statues of the crucified Christ (17th century, probably) and his sorrowful Mother, la Madonna Dolorosa (19th century) both in the confraternity’s church of Santa Croce della Foce.

A medieval church was built on this site in proximity to the pre-Roman walls of ancient Ikuvium probably in the 13th century and then restored in the 17th century and embellished with the works of various local artists. The procession departs from here and opens with four confratelli (confraternity members) also popularly called sacconi,  the name of the penitents’ white tunics marked with a red cross, the symbol of their guild la Confraternita della Santa Croce.  These lay brothers’ wear the buffa (the term used in Gubbio for cappuccio or hood) to disguise one’s identity in acts of penitence. The Gubbio nighttime silence is broken only by the dull, pounding, eerie notes of the battistrangole they carry, shaking them as they walk.  Literally meaning “beat and strangle,” these instruments of wood flanked with iron rings announce the arrival of the procession while setting a slow, even beat for those walking in the procession. The joyous ring of bells is silenced in most Umbrian towns from Holy Thursday to Easter Sunday.

The skull symbolizing Golgotha follows the battistrangole. Many in the procession carry torches and falo (bonfires) are lit in various piazzas along the route of the procession, for fire is an ancient symbol of purification, as well as of strength and force. Symbols of the Passion follow:  the cup, the 30 silver coins, the column, the rooster, the crown of thorns, “Pilate’s basin,” the I.N.R.I. inscription, Veronica’s veil, the shroud, the nails, the hammer, the sponge, the spear, Jesus’ clothing, the dice, the ladder, and the pincers.

Then comes the image of the Dead Christ on the cataletto (or bier; a stand on which a corpse or casket containing a corpse is placed to lie in state or to be carried to a grave) and the Madre Dolorosa follows. The Sorrowful Mother grasps an ancient wooden “rosary” of 33 beads, like those used by pilgrims and the flagellanti (flagellants) to whip themselves for penance. The two sacred images are accompanied by the singing of the Miserere by two choirs. King David’s penitential psalm whose polyphonic melody has been passed down through oral tradition and has been an integral part of the Gubbio procession since the 19th-century is sung with grande passione.

The Procession winds along an ancient route that allows the Dead Christ to be “displayed” for veneration at some monasteries, convents and churches, and at the home for the elderly. Just recently, the Procession was re-routed to include a stop to pay homage at the Mausoleum of the 40 Martyrs.

There will be a pause of 15 minutes for veneration of the Christ at the Pietrone (Great Stone) in front of a 14th century Gubbio civic palace. Prior to the Processione, vigil lights are lined up in the shape of a cross on this Great Stone. Various stories are linked to the stone’s origin including perhaps its use as an altar for the ancient pre-Roman inhabitants of Ikuvium, the Umbri.

The eerie pounding of the battistrangole, the rich symbolism, the haunting singing of the choirs, piety of the people, the fires, the torches, the enthusiastic participation of the eugubini of all ages, and the bellissima medieval scenography of Gubbio all unite to make Good Friday in Gubbio an event not to miss.

Anne offers bimonthly presentations on her many Italy insights. If you wish to be included in her ZOOM talks, email This email address is being protected from spambots. You need JavaScript enabled to view it..

View the embedded image gallery online at:
https://www.lagazzettaitaliana.com/travel/9689-gubbio-s-good-friday-living-medieval-street-theater#sigProId7a78825bec
Tweet
More in this category: « Street Art in Florence Tutto Vero, Campobasso in Serie A! »