Cinecittà: Hollywood on the Tiber 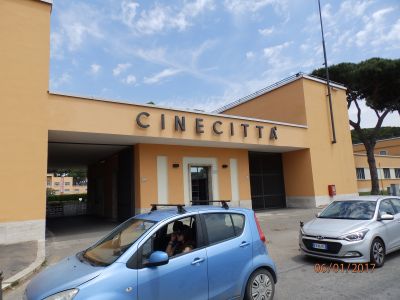 Cinecittà Studios, Italian for Cinema City Studios, is a large film studio in Rome. Sitting on 99 acres, it is the largest film studio in all of Europe. Cinecittà was constructed during the Fascist era as part of a plan to revive the Italian film industry. More than 3,000 movies have been filmed there. Contributing writer Jack Erickson shares his story about Cinecittà.

I was planning on traveling to Rome this summer, but, unfortunately, that will not happen. On previous visits, I sought out interesting locations, not just the usual tourist standards. In 2017 and 2018, I took the city's metro to the suburbs to tour Cinecittà, Italy's “Hollywood on the Tiber,” where many classic movies were produced.

In the 1930's, Benito Mussolini created Cinecittà on an industrial site south of Roma to make fascist propaganda movies since most Italians were illiterate. World War II interrupted movie production. Cinecittà became a home for refugees fleeing the war's devastation. In Cinecittà’s museum, you can watch 1940's newsreels of Italian refugees living in tents on old movie sets and stages.

After the war, Cinecittà was restored. Directors like Federico Fellini and Vittorio de Sica once again produced movies on 30 indoor stages and outdoor sets. Classic movies produced in that era include “Roman Holiday,” “Ben-Hur,” “Cleopatra,” and “La Dolce Vita.”

Federico Fellini is honored at Cinecittà with an impressive display of costumes, posters, scripts, movie props, and his cartoons. Fellini was quite an artist, not just a film producer.

Cinecittà’s backlot has permanent sets from earlier eras: Jerusalem during the time of Christ, Rome during the Republic, 15th-century Florence, and even 19th-century New York. In 2002, Martin Scorcese produced “Gangs of New York” at Cinecittà.

View the embedded image gallery online at:
https://www.lagazzettaitaliana.com/travel/9525-cinecitta-hollywood-on-the-tiber#sigProId16b0591559
Tweet
More in this category: « The Art of Hard Stones Balancing Venice and Tourism »