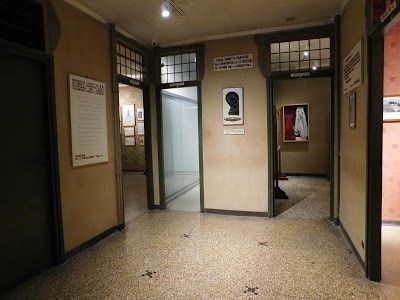 Museo storico della Liberazione, the museum recording the liberation of Rome from the Nazi occupation, is housed in a non-descript apartment building not far from the Basilica of St John Laterna in Rome. In it, visitors will find records of the Italian Resistance in 1944 during the WWII German occupation of Rome (Sept. 11, 1943 to June 4, 1944).

For it was in this building on via Tasso 145 that the German Security Police Command detained and tortured captured members of the Italian Resistance. Since 1955, the former cells and offices preserve original leaflets, posters and documents that create the record of events during the occupation. Photographs, recordings and some films from this time are on display throughout the museum.

The museum layout uses the original apartment floor plans. An audio guide escorts visitors through the rooms on each of the 3 floors or people can tour at their own pace as there is much to read and learn in the 19 rooms.

The rooms on the 2nd and 3rd floors during the time the Germans occupied the building “housed over 2,000 citizens, soldiers, partisans, who were detained, interrogated and tortured.” In several cells you can see the prisoners’ faint messages scratched on the walls.

Many of the rooms have documents, photos, posters, and artwork from the occupation. Most of the descriptions and details are in Italian but often there are short notations in English. Photos and details of detained prisoners are carefully displayed. The fate is listed for many of the detainees. This museum is full of sad rooms and much history.

View the embedded image gallery online at:
https://www.lagazzettaitaliana.com/travel/9499-museo-storico-della-liberazione#sigProIdc5bfbbafca
Tweet
More in this category: « A Day at the Beach of Roseto degli Abruzzi Packs of Wolves in Florence »