From Romania With Love: Developing Ecotourism in Northeast Italy 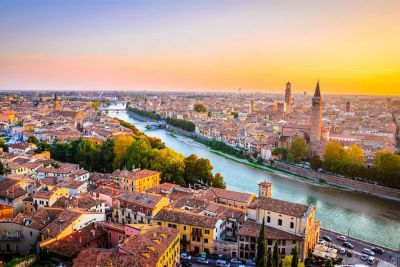 Despite Italy's current economic difficulties and the burden of immigration, there are still some wonderful examples of human resourcefulness to be found.

Imagine arriving in Rome without speaking a word of Italian, one of a group of Romanian immigrants. This doesn't look like an auspicious beginning for a go-getter entrepreneur managing ecotourism in the Veneto, but that's how it was for Carmen.

I first met this attractive young Romanian woman in my English conversation group about seven years ago. Her English was and is remarkably good and it was clear to me that she also spoke fluent Italian. Little by little her story emerged as I became more and more impressed by her determination and optimism, making a new life for herself in a small town in the Veneto, rising even to become a local Councillor.

Carmen came to Italy in 2003, knowing only her boyfriend, George. Life was tough, but she concentrated on her Italian and got a job, quickly realizing that they would never be able to afford a place of their own in Rome. However, with an address and a job she was able to apply for Italian citizenship and they subsequently moved to Padova where she bravely enrolled as a geography student at the university, using her part-time job to finance her studies.

Coming to northeast Italy as an outsider, she quickly understood – no doubt prompted by her geography studies – the possibilities for tourism, appreciating the history, landscape and traditions which the locals often took for granted.

It began with a Facebook page, offering half-day tours and wine tastings. Realizing that most tourists who would enjoy cycle tours don't bring their bikes with them, she invested in 10 bicycles for rent and set herself up with a desk in the main hotel of the Colli Euganei. Next, she and George, who gave up his job to join her, bought a minibus giving them the opportunity to take customers on longer treks for tours.

Ever the enterprising businesswoman, Carmen then applied for a grant from Ca' Foscari International Centre for Studies on Tourist Economics (Venice University) to be awarded to people under 35 who had a viable project which would support and sustain local culture. She won the award and used the money to set up her own office and staff in Montegrotto Terme, near Padova.

Viaggiare Curiosi has expanded enormously. Carmen has many contacts with local guides who also speak several languages and she arranges custom tours as well as regular excursions. Customers can tour the lesser-known islands of the Venetian Lagoon (like San Francesco Del Deserto) on a bragozzo, a traditional lagoon fishing boat now modified for tourist boat trips. The guided tours also include Padova, Vicenza, Verona, the Po Delta, and the Euganean Hills. The groups are comprised of no more than 25 people, a good number for meeting and chatting without being part of an anonymous herd.

Carmen uses local resources for an original take on tourist destinations. For instance, once a week the local rowing club rows traditional boats along the ancient canal in Battaglia Terme to visit Catajo Castle, surely better than arriving by car and parking alongside hundreds of others.

Cycling continues to be the most important aspect of what Viaggiare Curiosi offers. They now have a trailer and six different kinds of bicycles including electric bikes and cycles for children. They can deliver bikes to Marco Polo airport, Piazzale Roma or Tronchetto where the ferries dock in Venice, or any city or hotel in the area. Popular cycling holidays include the villas along the Brenta Canal or even cycling from Venice eastwards via Trieste to the Istrian Peninsula then back by ferry to Venice.

This month, there's a conference on sustainable tourism in Lecce. Carmen will be there, representing the Veneto, and will no doubt return bubbling with new ideas.

So, where next? It's interesting to speculate about where Carmen's ambitions will take her. Chatting in her little office, you get the impression that Viaggiare Curiosi will continue to expand while at the same time never losing its focus on supporting the local economy and encouraging in-depth visits instead of the superficial whirlwind tourism.