Go With the Flow in the Veneto 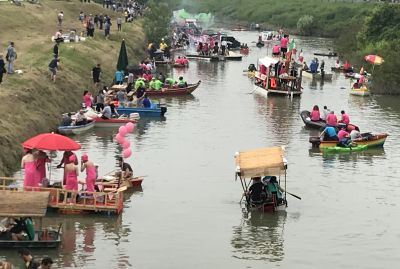 The Battaglia Canal was built in the 13th century to move the stone quarried from the nearby volcanic hills used to pave Venice. On the last Sunday in May, this same canal is the venue for the craziest regatta I have ever witnessed. The Remada a Seconda, which roughly translates as “Row with the Flow,” involves a kind of slow race in homemade boats from Battaglia Terme to the Venetian Lagoon at Pontelongo, a distance of around 30 km.

Anyone can enter, if you have a boat propelled by oars or sails, and the 10 prizes are generous, including a large TV, a smart phone and a bicycle. Groups in nearby villages plan their entries months ahead, usually with a theme that will involve fancy dress for the crew, flares to add to the atmosphere and crates of prosecco to sustain them during the long journey.

It takes a while to get the assembled boats into the canal, even with a crane hired for the occasion. Meanwhile, the sluice gates from the upper canal have been opened to allow a torrent to pour into the lower canal, the starting point, so that many of the oddly-shaped vessels begin to spin around out of control once they’re in the water.

The more ambitious teams make fantastical constructions on wooden platforms attached to oil drums. Some even use scaffolding to make double-decker buses or castles. These get the most cheers from the crowd as they set off on their haphazard journeys downstream. They often begin to lean dangerously after a while, and even collapse, but an ambulance trundles along the towpath and there are vigili in canoes to rescue the survivors of any shipwrecks.

At 9 a.m., after an encouraging speech from Massimo Mommolo, the Mayor of Battaglia, and a blessing from the priest, the hooter sounds and the whole crazy spectacle begins to disperse in clouds of colored smoke from the flares. Traditional boating songs in Venetian dialect sound over the loudspeakers and the canal banks are full of cheering spectators. The whole event is rather like a Brueghel painting of a peasant fair; a chaotic mass of people and boats all doing their own thing with excited dogs barking, trumpets and drums sounding and passing traffic stopping on the bridge to see what’s going on, causing huge hold-ups.

From my position on the bank, I watched the preparations of a large black boat with a crew of nine men wearing long red cloaks. In the middle was an enormous paper mâché head and another smaller head at the front. The well-constructed boat was perhaps a representation of Dracula. Once released from its temporary mooring it caught the current and floated sideways while the crew frantically paddled with homemade oars made to look like hands. They were overtaken by a floating beach party. The crew clad in pink towels and turbans, while smaller boats decorated with flags, balloons and banners jockeyed for position. A floating kitchen glided passed, the chefs already hard at work making fritto misto for the lunch stop at Bovolenta. I rather liked the stately black limousine, low in the water, with its glamorous passengers dressed in Edwardian costume. There was a desert island, a garden with a washing line of oversized bloomers (to act as extra sails) and a Viking long ship with a crew of ginger bearded men and women with horned helmets.

Battaglia Terme can’t compete with the Venetian equivalent over the same distance, the Vogalonga, where teams row all the way round Venice and its islands. That race is certainly more stylish, but in terms of fun, wholesome entertainment and reckless abandon, you can’t beat the Remada a Seconda.

View the embedded image gallery online at:
https://www.lagazzettaitaliana.com/travel/9174-go-with-the-flow-in-the-veneto#sigProId095aeaf316
Tweet
More in this category: « Casa Malaparte on the Coast of Capri Visitate Italia Piccola! »