Casa Malaparte on the Coast of Capri 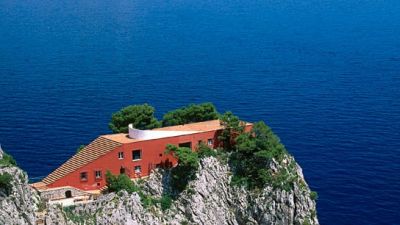 If you travel on the slow ferry from Naples to Capri, it may take up to 90 minutes to cross the Gulf of Naples and reach the island that is divided into two towns. To the west, Anacapri spreads across a plateau covering about two-thirds of the island and overlooking the town of Capri. When you land,  – at Marina Grande,  – the funicular will take you to Piazzetta, the center of Capri. ; and fFrom there, it may take up to two hours to walk the mile or so to Casa Malaparte, an iconic example of modern architecture, but not open to the public.

The house, built on a promontory on the southeast coast of Capri, was completed in the early 1940s by Curzio Malaparte, a writer, author, playwright, and film maker. He first worked with architect Adalberto Libera who was – acclaimed for his modernistic style and co-designer of the Italian Pavilion in the 1933 Chicago World’s Fair. But,  – but Malaparte took control and worked with a local master stonemason, Adolfo Amitrano, to build the structure.

Rising slightly over 100 feet above the churning waters of the Tyrrhenian Sea, Casa Malaparte,  – embedded into a solid rock foundation,  – follows the shape of the promontory at almost 230 feet long and 49 feet wide. The brick-red rectangle, with its inverted isosceles triangle stairway leading to the flat roof that is capped by a j-shaped white wall, is surrounded by a strand of Mediterranean shrubs and trees lining the edges of the cliff that drops almost straight down to the sea.

From the roof, the views are spectacular. : tThe famed Faraglioni (rock stacks) to the southwest, ; the Sorrento Peninsula to the northeast,; the cliffs of Capri north and west along the coast, and southeast, the endless horizon. A walk along the Pizzolungo Trail offers a stunning view of the top of the house. The trail follows the south coast of Capri and offers similar vistas as seen from the house, but at a slightly higher elevation. A hidden path from the trail descends to the secluded villa.

The interior of the villa is equally stunning, most notably for its picture windows that frame sections of the scenic and ever-changing panorama. One unusual feature is the heat-proof glass window behind the firebox of the massive sculpted concrete fireplace, offering a view of the Faraglioni between the flames.

Malaparte described the building as “like me;” not fitting in, but appearing to be part of its environment. He was born in Italy to a German father and Italian mother and took the pen name Malaparte (in Italian “mala” and “parte”) to describe himself as being on the bad side. Malaparte was in his teens when he enlisted to fight in World War I, first for the French and then transferred to Italy. ; and dDuring that time, he started his career as a journalist.

Disillusioned with the politics of Europe, after the war he became enamored with the Fascist movement and was part of Mussolini’s March on Rome in 1922. Malaparte authored numerous publications for the Fascist Party, but his writings about revolutions and totalitarianism angered Mussolini and in 1933, Malaparte was exiled to the island of Lipari.

At one point, Malaparte visited Capri and upon seeing the promontory, decided it would be the perfect location to build his house. In a 2014 interview with Alessandro Libera, son of the architect who first worked with Malaparte, Libera said, “the people in Capri hated Malaparte for what he had written about them and their island … when he decided to build his villa, they wouldn’t let him transport construction material across the island. : hHe had to have everything delivered by sea, using boats.” Carrying their tools and supplies, the workers climbed more than 100 steps carved into the side of the cliff to reach the top and build Malaparte’s villa.

During World War II, Malaparte wrote for the Italian newspaper (published in Milan) “Corriere della Sera” and was dispatched to the Eastern Front. Based on his war experiences, he wrote two books: “Kaputt” (1946) and “The Skin” (1952), both about the extravagances and poverty – the injustices – of war. The war also changed his political views and he joined the Italian Communist Party. He later became interested in Maoism, and when he died in 1957, he left Casa Malaparte to the people of China.

His heirs challenged the will, and while Casa Malaparte was vacant, it was featured in “Contempt” (“Le Mepris”), a 1963 film directed by Jean-Luc Godard and starring Brigitte Bardot and Jack Palance. Abandoned for at least 20 years, Casa Malaparte was donated to a science foundation in 1972. It has been undergoing renovations  – led by a distant relative  – and is currently used for conferences on architectural design.

Tweet
More in this category: « Museum of the Holy Souls in Purgatory Go With the Flow in the Veneto »