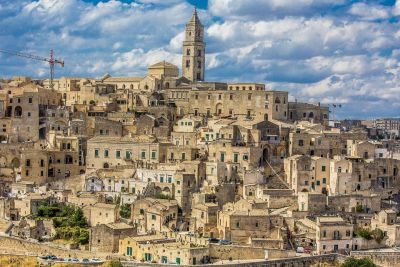 It was a stroke of luck when the crazy WWOOFing adventure that my sister Diana and I were on in Cancellara was suddenly cut short. We needed to find lodging quickly as the B&B in Salento, our next destination, wasn’t available yet. Luckily, were able to find accommodations in Matera in the Basilicata region of southern Italy. We had been there before and were excited to return to one of my favorite places in all of Italy. We found a wonderful B&B, Uno Sguardo Sui Sassi with a most hospitable hostess, Angela Rondinone.

Enchanted is the word that best describes Matera. Known as “La Città Sotterranea” (the underground city) it is famous for its ancient town known as the “Sassi di Matera,” cave dwellings thought to be the first human settlements of what is now Italy. The sassi are dug into the rock itself and the town is on one slope of the rocky ravine known as “La Gravina.” Many centuries ago, the caves served as refuges for monks who left magnificently frescoed masterpieces. Until the 1950’s, it was a place of poverty, malaria and high infant mortality rates with no electricity, running water or sewage system. Carlo Levi’s book “Christ Stopped at Eboli” raised awareness of these unsustainable living conditions. Between 1953 and 1968 half of the 30,000 inhabitants were moved to parts of the city undergoing modernization.

When an international jury in 2014 declared Matera the European Capital of Culture 2019, more than 2,000 musicians converged on the city for the opening celebrations on January 19 and 20.

Matera is an amazing mix of the ancient and the modern and has been called a “captivating tapestry of beauty and contradiction.” The centro storico (historic center) and the sassi have an abundance of restaurants serving fresh wines and food, art galleries and museums, majestic churches, and shops bustling with activity day and night. Masterpieces of Romanesque and Baroque architecture are everywhere. The Museum of Contemporary Sculpture is the world’s only “cave museum” with a rich collection of over 400 works of art from the late 1800’s to the present. Singers, dancers, storytellers, and classical and pop musicians perform outdoors any given day or night. No ticket or reservation is required. Each night for our evening passeggiata we were delighted with entertainment throughout the town. Step back in time and visit a museum housed in a cave exemplifying life in the 1700’s with a cistern, typical kitchen, stable, and manger. This is in sharp contrast to the Palazzo Gattini Spa with its treatment rooms housed in separate caverns. This elegant spa evokes ancient Roman baths with pampering and wellness treatments for body, mind and spirit.

You must catch the sunset when the pale stones of the sassi are imbued with every shade of pink and orange and the lights at dusk transform the city into a giant Nativity scene. This mystical aura has attracted internationally renowned filmmakers and directors for films such as 1985’s “King David,” 2004’s “Passion of the Christ” and perhaps the most famous in 1964 from the great Pier Paolo Pasolini, “The Gospel According to Matthew.” Located on the highest point in the sassi is the Matera Cathedral dedicated to the patron saint, the Madonna della Bruna and St. Eustace. Matera’s Feast Day is July 2 with the procession of the Madonna starting at dawn followed by the destruction of a chariot after it is ridden through town. This huge festival culminates in a grand fireworks competition in the evening.

Matera is a study in what can happen when great development and modernization leads to excessive population growth that cannot be sustained. Presently, as the Capital of European Culture, Matera will attract so many tourists that one worries its uniqueness may be compromised. I remain hopeful that it never loses its enchantment and look forward to returning some day soon. I encourage you to put it on your travel bucket list!

View the embedded image gallery online at:
https://www.lagazzettaitaliana.com/travel/9031-la-citta-sotterranea#sigProId1b23be8a13
Tweet
More in this category: « Matera - 2019 European Capital of Culture An Italian Landing in America »