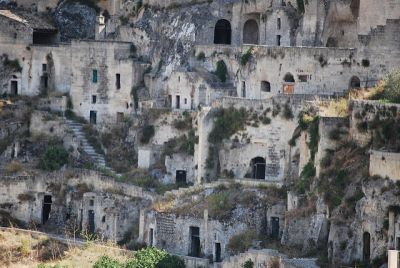 Matera, in the Basilicata region, was awarded the designation of European Capital of Culture for 2019 along with Plovdiv, Bulgaria. Matera is the third-oldest continually inhabited settlement in the world, after Aleppo and Jericho, with the first settlement dating back 10,000 years, making it 6,000 years older than Rome. Starting in January, Matera will have the chance to celebrate its ancient roots and avant-garde future with Europe and the rest of the world. In 1985, the Greek Minister of Culture, Melina Mercouri, who was also an award-winning actress, had the idea to develop a program that would celebrate the richness of cultures throughout Europe, highlighting their diversity while strengthening cultural bonds across the continent. As she noted, “Culture, art and creativity are not less important than technology, commerce and economics.”

Initially, the events lasted a few months and the first few cities to be awarded the honor were those we most often associate with Western European culture: in 1985 it was Athens, followed by Florence, Amsterdam, Berlin, and Paris.

Since 2005, the award has been given to two cities each year and beginning in 2021, a third city will be recognized every three years from a candidate country, a potential candidate or a country that is part of the European Free Trade Association/European Economic Area. Host cities have been selected through 2023 from a rotating schedule of EU member nations. Matera competed against 21 other Italian cities to become one of the two European Capitals of Culture for 2019. In addition to Florence in 1986, the only other host cities from Italy have been Bologna (2000) and Genoa (2004).

Matera is famous for its cave dwellings on the flanks of a steep ravine whose first inhabitants date back to the Paleolithic Era. Excavations prove that many cultures converged in the area, including the Greeks and Romans, Byzantines, Longobards, and Arabs. It is known as the Underground City and consists of the Sasso Barisano facing north-west, dense with richly carved entryways, and Sasso Caveoso facing south featuring homes arranged in tiers in a horseshoe shape, like an ancient theater.

The earliest settlements were the naturally formed caves which were later expanded into more complex structures connected by ramps and corridors by digging into the soft calcarenite rock. While photos from the outside may make the Sassi appear chaotic and haphazard, they were actually an ingenious response to environmental conditions that maximized the use of water and energy. Over centuries, the Sassi became organized into vicinati, or neighborhoods, which were centered around a piazza with a well and an oven for baking bread, the focus of communal organization that served a vital social role. Things began to change during the 19th century as the pastoral-agricultural way of life was no longer able to support the growing population. The cisterns, storage areas, vegetable gardens, and stables were modified to make more living space. To make matters worse, in the 1930s, the fascist government decided to implement a road construction plan that essentially paved over the drainage system for surplus and waste water.

A government minister declared the Sassi a “national disgrace” and laws were passed that sought to improve the conditions of the families living there. Funds were used from the Marshall Plan to forcibly relocate the inhabitants to new residences built on the nearby plains, without fully considering the effects of this dramatic change in their way of life. Many found it hard to adapt to the modern dwellings that kept them separated from their extended families and neighbors. Meanwhile the Sassi were abandoned to the elements.

In 1966, local groups began lobbying for funds to restore the grottoes and caves. These efforts uncovered over 150 rupestrian, or rock-hewn, churches covered with priceless Byzantine frescoes, including the Crypt of the Original Sin, considered the Sistine Chapel of rupestrian art, as well as Santa Lucia alla Malve, dating back to the 8th century, the first female monastery of the Benedictine order.

UNESCO designated the Sassi and the rupestrian churches a World Heritage Site in 1993 and they gained international attention when they were featured in Mel Gibson’s film, “The Passion of the Christ” in 2004 as well as Patty Jenkin’s “Wonder Woman.” Today, the Sassi contain artisan workshops, bars, restaurants, and boutique hotels. There is an underground swimming pool and a contemporary art museum. A software company employing 50 people even set up its offices in the underground caves. For its year as European Capital of Culture, Matera has chosen to focus on five themes: Ancient Future, Continuity and Disruptions, Reflections and Connections, Utopias and Dystopias, and Roots and Routes.

The opening ceremonies will be held on Jan. 19, 2019 when Matera will have the opportunity to highlight its centuries-old traditions and culture that have inspired its approach to the next millennium.