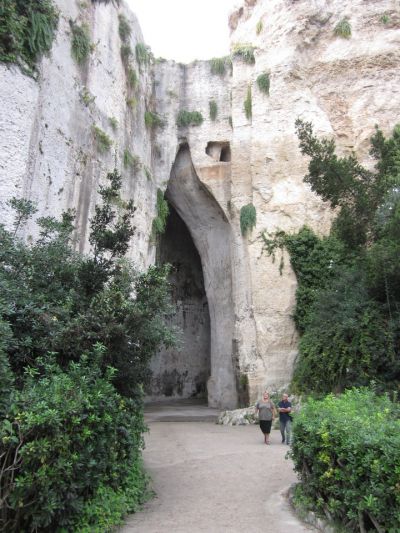 There is a pearl, so rare and hidden, found in South Eastern Sicily. You hope it will never be spoiled by time and tourism, a sort of lifelong friend I must see every time I return to my home in Sicily. She never disappoints me, never lets me down, comforts and soothes the soul exactly as she is. This serene and noble jewel is the ancient city of Ortigia – the original center of Siracusa. It’s a picturesque, peaceful and invigorating destination, whose silence and ivory Baroque alleys will linger in your memory long after you leave.

I was born 20 minutes from here. Siracusa is what we consider the “capital” of our province, so I know this special hamlet and city as if it was my native town. The Cattedrale di Santa Lucia, patron saint of the city, saint of sight and vision, was the first Christian Church in all of Europe. If you pay close attention or visit with a local or on a walking tour with an expert guide, you will notice that it was originally a pagan temple, later redone and completed with Baroque and Moorish details. We, Siracusani, celebrate Santa Lucia every year on December 13. She is a celebrated saint across the world, not only for Siracusani in the U.S. and in Latin America, but also and – interestingly – in Scandinavian countries, for example. One of the largest Santa Lucia/Siracusana communities in the world is located in Buenos Aires, Argentina. I’m lucky to know many of its top leaders and representatives whom I joined on a special Santa Lucia tour in 2007 in Siracusa. Thanks to my Argentinean friends, I learned and was touched by the miracles performed by the Saint in Sicily and abroad and had a special and lengthy tour behind the altar of Santa Lucia.

Siracusa is also known for the Sanctuary della Madonna delle Lacrime/Madonna of Tears. Here in 1953, in the home of a very poor family, a Madonna made of chalk was reported to have started crying human tears. My Nonna Francesca recounted time and time again the miracle she saw during her pilgrimage that very year. Today, an impressive tear-shaped dome has been built over the house where the miracle occurred.  A short walk from the Cattedrale is the Fonte Aretusa where you will find an extensive growth of papyrus plants. Many think of this plant as a Saharan native variety. In fact, it is here that it was referred to as the “carta dei Faraoni” (paper of Pharaohs). But, Sicily’s extraordinary and diversely rich climate allows for this rare plant to grow and reproduce abundantly, especially in Ortigia.

Greek mythology plays an important role in Ortigian culture. Aretusa and Alfeo were two characters from Greek imagination and legend. It is believed that Alfeo, son of the God Oceano, fell in love with Aretusa while she was swimming nuda. Aretusa noticed that she was being watched and escaped to the island of Ortigia where the Goddess Artemide transformed her into a fountain. Zeus, taken by Alfeo’s sadness, transformed him into a river allowing him to blend with the waters of the Ionian Sea until he reached Aretusa again in the fountain where they would be forever united.

A very unique neighborhood in Siracusa is the Quartiere della Giudecca (The Jewish Quarters). Here, wealthy Jewish merchants and bankers developed extensive businesses between Sicily and their native land, leaving impressive traces of their secular and religious culture within palaces and synagogues. The Jewish ghetto of Siracusa was the second-most developed in Sicily, after that of Palermo. Ortigia was also one of the most prominent Greek colonies of the Magna Graecia. The city’s amphitheater is proof of this and the grandest on the entire island of Sicily. It is also one of the most important centers for theatre in the Mediterranean. Comedy was born here and every summer a number of Greek plays are staged. A noteworthy Greek tyrant who resided in Ortigia was Dionysius who is remembered today for L’Orecchio di Dionisio/Dionysius Ear found in the Latomie del Paradiso (Caves of Paradise). It is found in an exotic subterranean cave dotted by palm trees and fragrant tangerines and oranges as well as bougainvillea flowers. It was first used for water storage but later became a refuge for political dissidents. Known for its clear acoustics, it is said that Dionysius used to enjoy hearing the screams of his prisoners from high above.

The mathematical genius, engineer, inventor, and astronomer Archimedes was also born in Siracusa. He is known for the Archimedes principle of calculating the volume of objects with irregular shapes. He also worked on the principles of leverage and infinitesimals, similar to integral calculus.

Perhaps on an upcoming trip to Italy, you will find the same love for Ortigia that I have found. All accompanying photos courtesy of Francesca Mignosa.