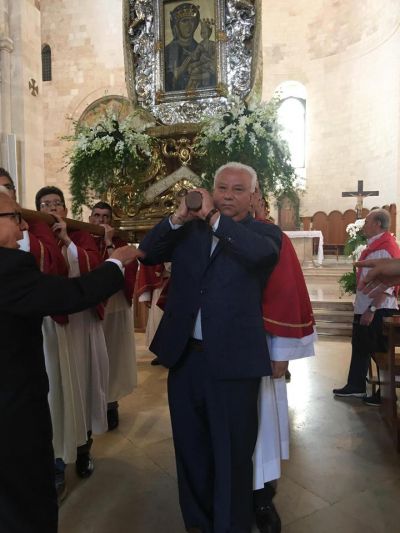 It’s not unusual for Italian-born Americans or Italians of American descent to reconnect to their roots by visiting their home towns or that of their ancestors. Peter D’Attoma, president of DaVinci Custom Travel and Tours, fulfills those dreams for hundreds of people every year as someone whose life work is providing personalized, custom tours of Italy. But it was Peter, himself, who recently experienced a life-changing experience in his birthplace.

As Peter cared for his mother, Rose, in the final weeks of her life, she encouraged him to return for the Festa Della Madonna Della Fonte in Conversano, his hometown in the southern Italian province of Bari, Puglia. The Festa is an iconic three-day celebration held annually on the last weekend of May. Peter and his wife, Donna, fulfilled her wishes shortly after Rose died and returned to visit his family there.

One evening during the visit, Peter reminisced with family about seeing his father, Angelo, carry the statue of the Blessed Virgin Mary in the Madonna Della Fonte procession. Pete was 8-years-old at the time. He wondered, aloud, whether he might reprise that privilege in the upcoming celebration. “I thought it was a long-shot because I knew you had to be ‘someone special’ to earn the opportunity to carry the statue, but I was hopeful that maybe I might do so, even for just a moment, in honor of my father and to continue the legacy,” says D’Attoma.

On the day of the procession, Peter’s cousin, Sario (a carabinieri in the town), approached the church leaders with his request and D’Attoma was summoned for an introduction. Sario explained that Peter had traveled to Conversano in honor of his father and his recently deceased mother. “The cathedral was packed as were the streets of the town in anticipation of the celebration,” says Peter. “When I was introduced to the leader he not only recalled my father, he said he would make it happen – he would see to it that I had the honor. The mayor of the town stepped forward to meet me, too, and a local journalist interviewed me to document the occasion. It was amazing.”

“I was instructed where to stand and told I was to be first in line,” recalls D’Attoma. “I stood alongside 8 men in tuxedoes and white gloves. Here I was, 62 years later, taking my position among the privileged in the town like my father had done, lifting the Madonna as we processed out of the church. It was a life-long dream fulfilled – one that moved me to tears. I know my mother and father were both smiling in heaven that day,”  he adds.

D’Attoma was also instructed to go to two other locations during the procession, to step forward and, once again, carry the Madonna in the streets of Conversano with his family watching from a nearby balcony. “It was truly a blessing. A dream come true,” says Peter.

Tweet
More in this category: « Portovenere and the Gulf of Poets Dolce Far Niente in San Gimignano »