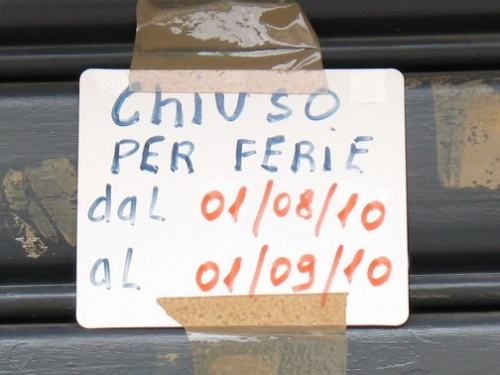 Ahhh... it's finally August-time to pack up the summer wardrobe and head to the beach with not a care in the world for a three week vacation. No more emails, phone calls or office drama. Your biggest stress is figuring out which beach club to hit up first and what restaurant to dine at. Although it may sound like a dream, this is reality for southern Europeansâespecially Italians, no questions asked.

August is practically considered a holy month for Italians. Those three weeks are untouchable, immutable, and undeniable and despite the economic crisis, I highly doubt that the government will try to abolish the vacation monthâunless Premier Mario Monti wants to face a national outrage of millions of angry Italians. Recently, when I spoke with my friend back in Milan, she proposed "our" August plans-"Ok so let's do Cap d'Antibes for the first week, then shoot down to Capri for the second week, then how about the Eolie Islands the last week..." When I explained to her that I wouldn't be joining her she almost had a heart attack, "What do you mean you work in August? But do you work in July too? How do you do it?" I simply responded, "This is America." Like I said, August is holy.

The month long vacation is concentrated around the day of Ferragosto, August 15th, the day of the Assumption and crowns the "last" month of summer. How seriously Italians take this month you would think they're dealing between life and death. It's the time when businesses close and stores shut down. Nothing, and I mean nothing, gets done because every Italian with a pulse is at the beach or mountainside. Don't get me wrong, Italians are hard workers and work hard for those three weeks off. Weeks before, everyone stays late in the office to finish all projects, etc. When I worked at Glamour, we sent to press the September, October and November issues before we shut down the fashion department.

The three weeks of vacation is also known as "le ferie," which means "the holidays," not to be confused with the holidays in December and January which are known as "le feste," which by the way merits at least one week off. Aside from celebrating the Assumption, Italians more so celebrate suntan lotion and lazy days. But actually, what most people don't know is that the month long vacation is not something that was invented in the last century or so. In fact, we can thank the Romans. Ferragosto or feriae augusti, Latin for "Augustus' holiday," was an important ancient Roman holiday that lasted the whole month of August, instituted by the emperor Octavius Augustus in the year of 18 AD. All mundane activity (i.e. work) came to a halt and the Romans feasted and honored diverse gods and goddesses, typically those associated with the harvest and seasons. Also during the feriae the division of classes was practically ignored and there was the rare social mingling of citizens and slaves. If that's not sufficient enough, the festivities was actually a carry-over from a much older Roman festival which, according to Roman mythology, was created by Romulus. The Consualia, celebrated the god of the harvest, Consus, by exempting all horses, donkeys and mules from labor. Chariot races were held in the Circus Maximus and the whole community assembled in a drunken fest.

So what does this mean for Italians today? The August vacation is not just to go out and have funâlet's face it; Italians do that on a daily basis. The main purpose is to really escape the hectic city life, recharge your battery and spend the sweltering hot days away from the city. A great vacation can help reconnect with ourselves, promote creativity and keep our stress levels down, thus keeping us healthier human beings. When Italians return to the city in September, they are recharged and ready to front a "new season" of work with their impeccable tans.

After five and a half years of living in Italy, it's now hard for me to fathom spending August far away from the white sandy beaches and the turquoise Mediterranean watersâLake Erie doesn't really cut it. We can only dream that Americans too, will do as the Romans do and take August off to recharge our batteries because after all, life is about enjoying ourselves in the company of others and of course, living la dolce vita.

Tweet
More in this category: « Palermo's Square of Shame The "H" factor »