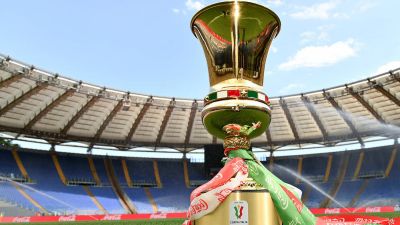 The Coppa Italia tournament is heading into the Semifinals this month and we can expect some great calcio out of the remaining four clubs. This annual tournament starts with 44 Italian clubs from Serie A, Serie B, and Serie C. They are placed by a combination of how well the previous season went for the clubs and draws. This competition occurs during the regular season and has no effect on the current season standings. Or, as Ted Lasso puts it “A March Madness tournament in the middle of our season featuring every dang team in the country? Yes, please.” This season’s final will be a single elimination game played in the Stadio Olimpico in Rome.

The teams are playing against each other to win the title of the Coppa Italia, the second trophy you can win in the season. The tournament winner receives the Coccarda to wear on their kits the next season signifying their accomplishments. While not as sought after as the Scudetto, the Coppa Italia comes with pride and can uplift a team. The winner automatically qualifies for UEFA Europa League as well as the Supercoppa Italiana the following year.

The current holder of the Coccarda is Juventus, winning a record 14th title last year. This year it looks like they will take a run at a 15th as one of the four remaining teams in the tournament after beating Sassuolo in February. Juventus seems revived after having a lackluster first half of the season. They now are one of two Italian teams left in the champions league, are still in the running for the Coppa Italia, and recently have claimed fourth place in the league standings. They will take on Fiorentina next in the Coppa Italia on March 2 in Florence for the first leg of the Semifinals for the tournament. The second leg will be held on April 21 in Torino. The winner will go on to play in the championship.

The other two teams left in the tournament are familiar foes as Inter takes on Milan on March 1 and again on April 20, giving the Italian calcio fans two more Derby Della Madonnina to look forward to. Both matches will obviously be played in Milan at San Siro. We will see if Inter can get revenge for only their second loss this season to Milan on February 5.

Anything can happen in the Coppa Italia as the competition celebrates its 100th year. Be sure to tune into Paramount+ to catch all the matches. The CBS crew has done a terrific job this year covering the matches and have put together great preview shows you can stream, giving analysis for the Coppa Italia as well as what is happening in Serie A. This year has been the best coverage for Serie A in America and with the semifinals of the Coppa Italia ready to be played as well as a very close run for the scudetto, it is a great time to be a fan of calcio.