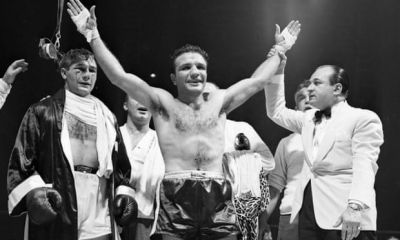 First-generation, Italian American Jake LaMotta is remembered for his hall of fame boxing career, securing the middleweight championship in spectacular fashion at Madison Square Gardens in NYC on June 16, 1949.

LaMotta survived a turbulent upbringing in the Bronx, experiencing a rough, seedy and even criminal early life as a teenager and into his 20s as he later confessed in his book. But, it was what he possessed in his hands and how he battled in the ring that made him different and special. His boxing tenacity, toughness and slugging power made him a dangerous fighter in the ring, respected by all and feared by opponents.

Ring Magazine, a respected publication on boxing, ranks LaMotta as one of the 10 greatest middleweight champions of all-time. In 106 total fights, LaMotta had 83 wins (30 by knock-out), 19 losses and four draws. He was inducted into the International Boxing Hall of Fame in the inaugural class of 1990.

LaMotta was born-and-bred in the Bronx to Italian immigrant parents. His father was from Messina, Sicily. It was he who introduced LaMotta to a hardened, seedier lifestyle in the Bronx, forcing young Jake to fight other boys to entertain neighborhood adults who threw pocket change into the ring for enticement. LaMotta’s father gladly collected the money and used it to pay the rent.

Young LaMotta had valuable pre-training in boxing and he capitalized on those pugilistic skills in the old garages and back alleys of the Bronx. He learned to box while in a reformatory in upstate New York where he had been sent for attempted robbery, reports confirmed. LaMotta was convinced to turn professional at age 19 in 1941, and the LaMotta legacy was born – battling and bleeding in the Bronx.

“There is much more to LaMotta than a granite chin. LaMotta was a clever boxer who executed the nuances of the game with fine precision. While he was able to absorb punches with little problem in the ring, he was also adept at rolling with punches to minimize the damage. He likes to play possum in the ring, lulling opponents into a false sense of confidence before unleashing his own attack. And, perhaps above all, he had a tremendous will to win. His aggressive, unrelenting style earned him the nickname, ‘The Raging Bull,’” he is accurately described in the International Boxing Hall of Fame (Canastota, NY) annals in 1990.

A six-fight series with Sugar Ray Robinson largely defines LaMotta’s career. They met for the first time in 1942 in New York, where Robinson earned a 10-round decision, victimizing Robinson with his first loss in 41 fights. Robinson, who fought once in between the three weeks, garnered a decision in the next fighting encounter.

The rivalry would resume in 1945 and Robinson took a 10-round decision in New York. In the interim, LaMotta was also busy fighting a slew of other top-ranked opponents. LaMotta beat world-class fighters, ranging from welterweight to heavyweight. Among his victims were Fritzie Zivic, George Kochan, Tommy Bell, Bert Lytell, Jose Basora, Bob Satterfield, Holman Williams, and Tony Janiro.

On Nov. 14, 1947, LaMotta was knocked out in the fourth round by Billy Fox. Suspecting the fight was fixed, and it was, the New York State Athletic Commission withheld purses for the fight and suspended LaMotta. The fight with Fox would come back to haunt him later in his life in a case with the FBI. In his testimony and later in his book, LaMotta admitted to throwing the fight to gain favor with the Mafia so he could get his title shot. To justify his action, LaMotta stated that he had no other options at the time. All agreed the fix was a certainty and their staging was inept. LaMotta wrote: “The first round, a couple of belts to his head, and I see a glassy look coming over his eyes, Jesus Christ, a couple of jabs, and he’s going to fall down? I began to panic a little. I was supposed to be throwing a fight to this guy, and it looked like I was going to end up holding him on his feet…By the fourth round, if there was anybody in the Garden who didn’t know what was happening, he must have been dead drunk.”

LaMotta openly confessed in court to cheating the sport of boxing, stating for posterity: “Make these boys see. It wasn’t fear. It wasn’t cowardice. It was even money. It was the only way. The only way to get my shot: it was mine. I’d earned it. Nobody would give me a chance, five years as an uncrowned champion. I deserved that shot. I did what needed to be done.”

The thrown fight and a payment of $20,000 to the Mafia got LaMotta his title fight against World Middleweight Champion Marcel Cerdan.

On June 16, 1949, LaMotta met Cerdan and won the middleweight championship in the 10th round by TKO, despite being significantly behind on points. Cerdan and LaMotta were scheduled to meet in a rematch, but the plane carrying Cerdan back to the U.S. crashed, and Cerdan was tragically killed.

In 1950, LaMotta successfully defended the middleweight crown against Tiberio Mitri and Laurent Dauthuille. Trailing on the scorecards, LaMotta staged a miraculous 15th-round knockout of Dauthuille to retain his middleweight belt. That set the sixth and final meeting between LaMotta and Robinson.

LaMotta and Robinson met on February 14, 1951 at Chicago Stadium and this time LaMotta’s middleweight crown was at stake. As the fight ensued, Robinson began to build a comfortable lead. Although LaMotta absorbed a tremendous amount of punishment, he refused to fall. Finally, in the 13th round, the referee stopped the fight and LaMotta lost his middleweight crown to Robinson.

LaMotta retired in 1954. He led a troubled personal life and was married seven times. Based on his 1970 book, “Raging Bull: My Story,” the film, “Raging Bull” was released in 1980 by director Martin Scorsese and starred Robert DeNiro.

LaMotta remained active speaking at public engagements and working as a witty, stand-up comedian. He published several books about his career, life and his memorable fights with Robinson.