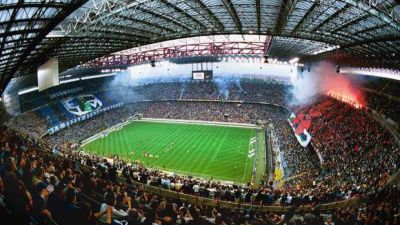 Outlined in the grey November sky, the statue of the Virgin Mary sits upon the Duomo of Milan overlooking the city. It was placed after 388 years of construction of the gothic masterpiece that took over six centuries to complete. The Madonnina, nicknamed “little Mary” and being the center and high point of the duomo, was given special privilege amongst the Milanese skyline. In its honor, nothing could be built higher than the golden statue. This rule was respected by the people of Milan so when Pirelli finished building their skyscraper, not far from the duomo, a replica of the Madonnina was placed on the top to honor the tradition. This was done again with the newest high point in 2010 and again in 2015. The Madonnina always being a focal point for the people of Milan.

It is no wonder why the two clubs of Milan chose to use this statue as the name of their rivalry game. The Derby della Madonnina began in 1909 and will be played again this November 7. Inter holds an edge in terms of records over Milan, but you can always throw out the record books in a rivalry game.

Not only do these teams share the same city and the same stadium, back in the day they were one in the same team. Milan football and cricket club was founded in 1899. Like so many other soccer clubs in Italy, this club was founded by English expats that brought with them the beautiful game. The club gained notoriety in the city winning Italian titles in 1901, 1906, and 1907. However, in 1908 it was ruled in Italy that there would be two leagues. The first league the “Italian Championship” was to be made up of Italian players only. The second league the “Federal Championship” were clubs that could have a mix of foreign and domestic players. For Milan, a team founded on international players, this was a problem. It was decided that Milan will play in the Italian Champions league, as it was the more prestigious league. This was to the disagreement of many since the Swiss players on the team would be ineligible.

In March of 1908, a group of Milan members met at the Ristorante L’Orologio di Milano and it was decided they would form their own team to play in the Federal Championship league. Internazionale Milano was born bearing the name that represents their founding principle of being “brothers of the world.” With new blue and black colors, the nicknamed Nerazzurri were ready to become a fixture of the city of Milan. The next season Milan decided to join the Federal Championship with Inter, but the damage was done. The rivalry was born.

The Derby della Modoninna is not as violent as other derbies in Italy, such as the Derby della Capitale in Rome. This is mostly due to both clubs doing so well in league play that the focus is mostly on trophies, not on each other. However, the derby had its fair share of issues with violence in the past. So much so that the two fanbases met with an agreement, no more violence, no more fear. The supporters will use their energy in the stadium to show the other side who has the best supporters. This makes for an excellent show inside the stadium with flag-waving, singing, and flares being seen in the stands throughout the match.

With crowds back at the San Siro stadium after a yearlong wait from covid, these two fanbases should not disappoint with their show of support, even if the stadium is only allowed at 75 percent compacity. Hakan Çalhanoğlu has switched the red and black of Milan for the blue and black of Inter. This will be an emotional moment for the Turkish midfielder. It will be an excellent day for calcio and a much-needed sign of things getting back to normal in Italy. The people of Milan will be focused on this one match on Sunday being played under the watchful eyes of the statue of the Madonnina.