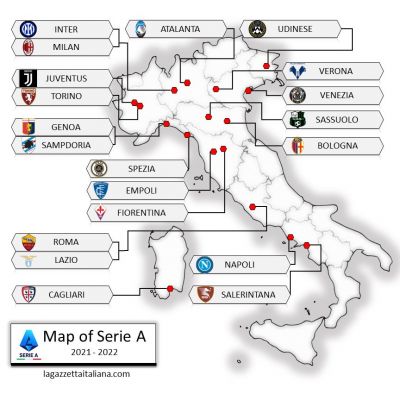 Historically, the club that has had the most success in Italy is Juventus. Known as the Old Lady, they boast 36 league titles, 14 Coppa Italia titles, and nine Supercoppa titles, being the record holder for each. The next two biggest teams in terms of fan bases are both Milan based teams, Inter and AC Milan. Inter has 19 league titles and is the only team in Italy never to be regulated. Also, it is the only team to have won the treble in Italy, a Champions League title, the Scudetto, and the Coppa Italia, all in the same year. AC Milan, who shares the same stadium as Inter, has 18 league titles and has won the most Champions League titles in Italy with seven. These three not only represent the biggest clubs in Italy but are three of the biggest clubs in the world.

Atalanta has become a household name in soccer. They are known as the Regina delle provinciali ("queen of the provincial clubs") due to being the best team not to be in a regional capital. They won a Coppa Italia in 1963 but are still looking for their first Scudetto. Along with Juventus, AC Milan, and Inter, Atalanta will compete in the European competition, the Champions League, this season. It is their third consecutive time in the tournament. These teams represent the best of Italy and will be paired against the best of other European clubs.

Napoli, AS Roma, Lazio, and Fiorentina along with aforementioned Juventus, Inter, and AC Milan are known as the Seven Sisters of Italian football. These represent the clubs with the biggest fan bases and therefore the most resources. Roma and Lazio both play in Rome’s Stadio Olimpico, while Fiorentina is the only major team in Tuscany. Napoli is a bit unique as they have taken on the mantle of the team of the south for Italian football since all other major clubs are in the north or central parts of Italy. They bring a unique culture to the sport with a massive fan base mostly from supporters in the Campania region of Italy.

These teams are in the middle tier and could fall into regulation if not careful. Some have had great success in the past with Torino and Bologna having seven league titles each. Spezia joined Serie A for the first time last season. Verona won a Scudetto in the 1980s when Serie A was loaded with talent. Udinese had a surprising 2004/05 season finishing fourth, placing them in the Champions League the next season. The small town of 40,000 inhabitants, Sassuolo’s soccer team, nicknamed Neroverdi, played its first Serie A match in 2013 and has not been regulated since. Sampdoria won the Scudetto in the 1990/91 season being the last team outside of the Seven Sisters to have won the title. Cagliari represents the Island of Sardinia. Genoa, or known as its official name, Genoa Cricket and Football Club, is the oldest club in Italy founded on Sept. 7, 1893. They claim nine titles dating to their first in 1898.

Each season the bottom three teams from Serie A get regulated to the second tier Serie B and the top 3 teams from Serie B get Promoted to Serie A. The most recently promoted teams from Italy’s Serie B are Empoli, Salernitana, and Venezia. Empoli and Venezia have had some success in Serie A while Salernitana has not seen the top league in 23 years. Venezia has been popular in the media this season with high fashion marketing as well as fan favorite jerseys.

Whether you root for a team based on name recognition, history on the pitch, or regional family connections, the beautiful game is worth taking an interest in for any sports enthusiast. This season looks to be one of the most competitive in recent history. The flag-waving and singing of the fans have been missed and is a much-appreciated site after the empty stadiums of last season due to the Covid lockdown. So, grab an espresso, pick up some cannoli, and enjoy. Now is a great time to be a fan of Serie A.