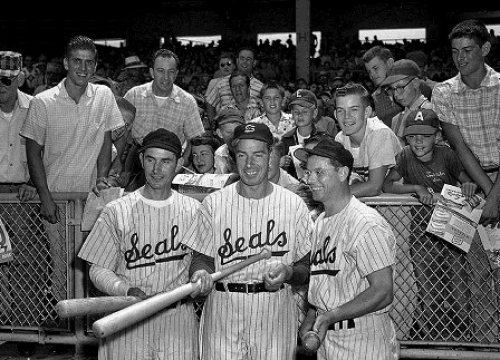 "Take me out to the ballgame..." America's favorite sports pastime is famous in part because of the numerous contributions of Italian-Americans to this sport that is synonymous with summer.

If one were to pencil in a hypothetical lineup of these major leaguers - many of whom are enshrined in the Cooperstown Baseball Hall of Fame - the roster would include Ping Bodie (Francito Pezzolo) of the early 1900s, the three DiMaggio brothers ("Jolting Joe" of the New York Yankees, Dom, left fielder of the Boston Red Sox and Vin, of the Pittsburgh Pirates), Carl Furillo, Lou Pinella, Rocky "Don't knock the rock" Colavito and Tony Conigliaro.

Italian-Americans starting on the hill would be Sal "The Barber" Maglie, Vic Raschi, Barry Zito, Frank Viola, Ralph Branca, John Antonelli, Mike Mussina and John Montefusco - big-time winners and all-stars. Don't forget the top-notch Cleveland Indians southpaw, Don Mossi, who had his share of wins and was a great relief pitcher. Rounding out the lineup would be Tom Candiotti, the Tribe right-hander and knuckleballer.

Tweet
More in this category: « The unbeatable experience of soccer in Italy 2014 FIFA World Cup »